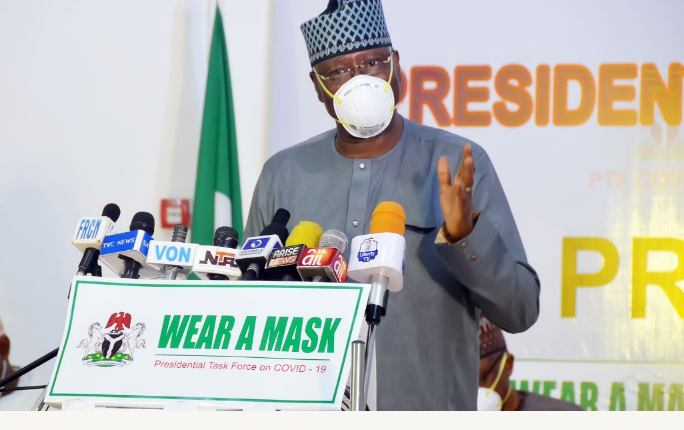 The Federal Government has expressed worry over the mental state of health of the survivors of COVID-19 in the country.

The Secretary to the Government of the Federation (SGF) and Chairman of the Presidential Task Force (PTF) on COVID-19, Boss Mustapha, raised the alarm on Thursday in Abuja during the joint national briefing of the taskforce.

According to him, the PTF is monitoring situations around the World and will continue to raise the flag so that Nigerians can pay adequate attention to the rising number of cases especially in high burden countries.

“The PTF is still very much concerned about the mental health of survivors of the COVID-19 virus.

“In this regard the PTF is following reports from researches around the world regarding the state of psychiatric health of survivors and has intensified plans for in-country response under the treatment and post-treatment regimes,” Mustapha said.

He said that monitoring the global situation will particularly help in planning to or not to, embark on trips and that the candid advise of the PTF remains that non-essential trips should be totally avoided.

He noted that the global cases crossed the 52 million mark with USA, India and Brazil accounting for 48 percent of all global cumulative burden.

“The USA has been recording over 100,000 cases daily in recent times and the rate of fatalities is increasing in the UK and other European Countries.

He added that South Africa now accounts for 38 percent of total cases in Africa, with up from 50 percent as at September and Nigeria now ranks 6th down in Africa, warning that the nation don’t have to let the guards down for a second wave.

“The number of cases has been fluctuating lately and that is an indication that we are not out of the woods yet.

“The cases in Lagos where multiple infections were recorded in two schools are typical examples of the danger of reopening institutions without the required measures,” Mustapha said.

He said, “We must all rally round each other to stop this pandemic from destroying our lives and economy. The PTF believes strongly that now is the time to raise the tempo of not just our national response but also our preparedness for a new wave of the pandemic or any other epidemic for that matter.

For example, it has been strongly observed that places of worship, gatherings and other events have dumped the use of face masks and adherence to other NPIs.

He also urged all Nigerians to come out for regular testing, as the testing rate is very unencouraging.

He said, “Mauritius has the highest tests per million (218,535) while Nigeria stands at 3,605 per million. This is grossly too low to be at a comfortable stage of defeating the pandemic considering the size of our population.”

The SGF also commiserate with the President, Government and people Ghana, over the death of a former President of Ghana, Jerry Rawlings.

“Similarly, on the 10th of November, 2020, COVID took another high-profile victim in the person of Saeb Erakat, PLO Chief Negotiator. We also commiserate with the Palestinian authority on this great loss. This will no doubt have a tremendous impact on the peace process in the Middle-East,” Mustapha said.