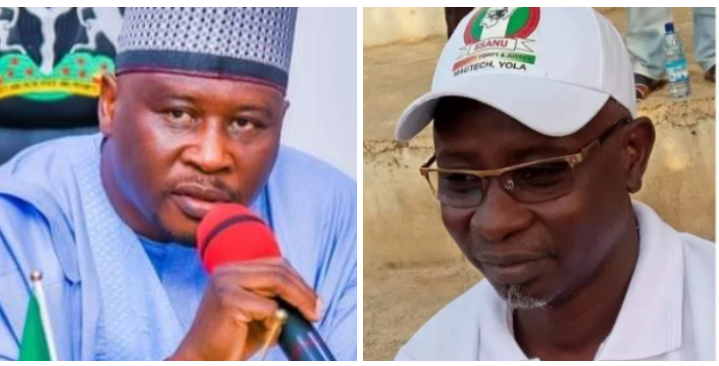 The press release Tuesday, signed by the Press Secretary to the Adamawa State Governor Mr. Humwashi Wonosikou revealed that Mohammed Haruna, another Adamawa son, was elected National President of the association at the end of its 2nd Quadrennial National Delegates Conference in Abuja.

Rt. Hon. Fintiri said “On behalf of the entire people of Adamawa state, I wish to congratulate Mohammed Haruna Ibrahim who has made the state proud at the recent SSANU elections.

“I am absolutely confident that he will not only sustain the achievements of the past leadership, but even surpass them and help the Union attain greater heights under his watch”.

Fintiri attributes Adamawa’s backwardness to the past…

Fintiri described Haruna’s election as a “Window that will open up new vistas for non academic staff of Nigerian Universities”.

The governor said judging by the antecedents of Mohammed, in Union politics as first council Member of the Institute of Public Relations in Adamawa state and now first SSANU President from the northeast region, he has no doubt that he would do well. “I can only urge you to continue with your support to the new President to deliver on his campaign promises”.

“I am a proud Governor to have two Presidents of powerful Unions emerging during my tenure”.

Fintiri pointed out that Mohammed like Ladi both started their careers in the Newsroom of the Adamawa state owned television ATV Yola and have today risen to make the state proud.

While also congratulating SSANU for conducting a credible poll, he wished Mohammed Haruna a highly successful tenure, pointing out that “The attainment of a steadily progressive SSANU entails all hands must be on deck with a great sense of responsibility and patriotism”.

He described Mohammed as a thoroughbred administrator whose wealth of experience will be brought to the fore in the discharge of his duties as President.

Fintiri attributes Adamawa’s backwardness to the past administrations, does it…