Cutting Through Sea Ice reveals how life of not only human beings but mammals and indeed all the living God's created should be respected assisted and defended against any form of hazard. Three whales trapped by sea ice attract the world for rescue, the kind of rescue the human kind trapped by bandits, kidnappers and Boko Haram among other kinds of insurgents should be extended to 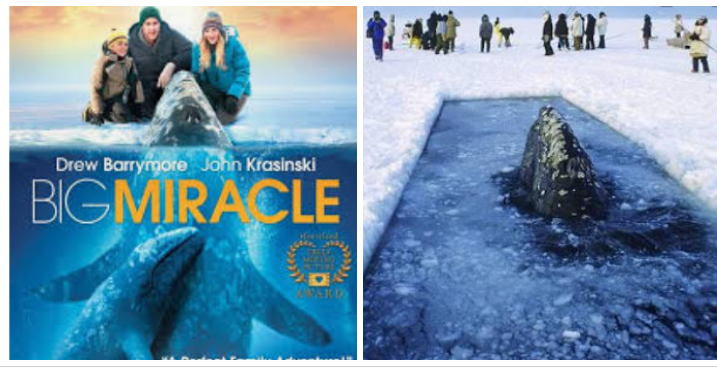 Big Miracle is a 2012 British-American drama film directed by Ken Kwapis, and stars Drew Barrymore and John Krasinski. The film is based on Tom Rose’s 1989 book Freeing the Whales, which covers Operation Breakthrough, the 1988 international effort to rescue gray whales trapped in ice near Point Barrow, Alaska.

Almost 25 years ago, the world’s attention was rapt on three gray whales stranded by encroaching sea ice off the coast of Alaska and the effort to free them.

Dave Withrow, a marine mammal biologist with the National Oceanic and Atmospheric Administration (NOAA), was called in to help with the rescue, which had to contend with frigid temperatures, persistently freezing ice and coordinating a wide range of groups that wanted to help with the effort.

Withrow spoke about his experiences during the rescue, called “Operation Breakthrough” in a recent NOAA interview.

The three young gray whales became trapped by sea ice off the coast of Barrow, Alaska in October 1988, after they stayed too long in their feeding grounds.

“The whales were relatively young and confused,” Withrow said. 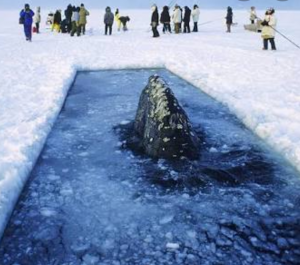 Gray whales make an annual migration from their feeding grounds in the Bering Sea to the lagoons of Mexico’s Baja California — an epic journey that stretches 10,000 miles (16,000 kilometers). But timing is key, and the whales usually leave before the sea ice can trap them near the coastal waters.

The rescue mission had to focus not only on freeing the whales and getting them back out into open ocean, but also in punching holes through the sea ice so that the whales could breathe.

Local Inupiat hunters did most of the hole-cutting, Withrow said, with their knowledge of the local area and ice significantly helping the effort.

Companies that saw the story on the news contributed chainsaws to cut through the ice and generators to provide power and lights, Withrow said.

Temperatures were so brutally cold, though, that the breathing holes caught in the ice kept freezing over. One company that specialized in water pumps send ones that would circulate the water and prevent it from freezing. And as Withrow explained, the pumps turned out to have another serendipitous impact:

“All along, we had planned to use whale mating sounds to lure the whales from hole to hole. Quite by accident, we discovered that the noise generated by the pumps attracted the whales. The pumps allowed us to coax the whales to a new breathing hole ahead.”

On the other side of the frozen ice, a Soviet icebreaker was cutting a miles-long channel through the ice to give the whales an easier path. Care had to be taken to keep the icebreaker from coming too close to the whales, though, Withrow said.

He added that the event marked an unprecedented level of cooperation: “This was during the height of the Cold War. Cooperation between the United States and Soviet Union on any issue was basically unheard of, especially on something so publicized.”

Unfortunately, one of the three whales did not survive the rescue attempt, but the other two were safely guided to the channel.

“Once freed, the whales still had a difficult path, swimming through jumbled ice left behind by the ice breakers, but we led them to the best possible spot for returning to the migratory path, and even the weather was in their favor,” Withrow said.

Exactly what became of the remaining two whales isn’t known, as scientists reversed a plan to put satellite trackers on the creatures after the one whale died, so as not to overly stress the other two.

Despite their initial confused state, the whales seemed to realize the purpose of the rescue, Withrow said.

“Once we started moving the whales toward freedom, however, I couldn’t help but think that they knew something was happening. They seemed to understand that we were there to help them along,” he said.

Withrow, who participated in many other whale rescues, said he plans to see the movie

Monarchy In Maiha: Deconstructing The AG’s ‘Re- Judgement Of The Court Of Appeal For Interpretation; A Non Romantic View