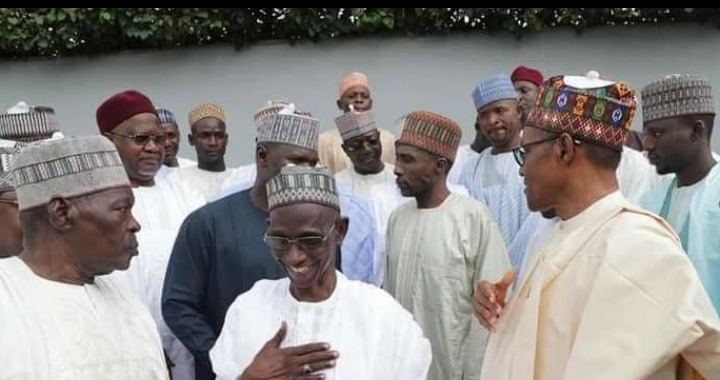 I was then in Form 2 and I was proud that somebody from my local government area was in that position. He didn’t know me, of course as my senior, but I knew him well, especially for his eloquence at MSS meetings in the state.

For his working experience, late Dauda was first employed on finishing from GSS Yola in 1974 when he was appointed into the North Eastern state civil service as Fisheries Assistant in the Ministry of Agriculture and Natural Resources and stationed at Mallam-Fatori now in Abadam LGA of Borno state.

In 1975 he was ransferred to the Ministry of Information in Maiduguri as Information Assistant; and in 1976 when Gongola State was created, late Dauda was deployed to the state on the same rank. In the same year he resigned and secured admission in 1979 to study his ‘A’ levels at CPS, where he was picked for Federal House of Representatives at the age of 21.

This project took Adamawa by storm in that year’s elections and late Dauda was one of the brains behind it. But while the ANPP won the hearts of voters and their votes, we, in the PDP won the election. And while they won their subsequent election petition in the Election Tribunal in Yola, we won the case at the Court of Appeal in Jos.

In 2006 and 2007, late Dauda’s popularity in politics further soared when he became Director-General of Hon. Awwal Bamanga Tukur’s PDP Governorship Campaign Organisation for the primary election that would lead to the 2007 general elections. But when the primary election failed to hold, and Admiral Nyako became PDP’s candidate in the Gubernatorial election, Auwal Tukur collapsed his campaign organisation into Nyako’s because of which late Dauda served as member of the transition committee that worked out the framework for Nyako’s Administration in 2007. For the first late Dauda and I became members of the same party that made me have a dependable political ally in Fufore. He called me ‘kanina’, my younger brother.

It is still fresh in my mind that late Dauda was also a member of the committee appointed by the Governor Nyako administration that fashioned out a blueprint for the Industrialization of Adamawa State. Young politicians may look for the blueprint as the document may still be in possession of Admiral Nyako, who is very good in keeping records.

In 2007 when late Dauda became Principal Special Assistant in charge of political matters in the Deputy Governor, Bala Ngilari’s office, I was elected into the House of  Assembly for Fufore/Gurin state constituency.

We became stakeholders of the PDP in the government at the state level and in Fufore LGA. We bonded very well. We took all major decisions pertaining the party and our local government in his residence at No. 9, Owerri Street, off Hospital Road, Jimeta.

After so many hiccups in our political journey in Yola and Fufore, my relationship with late Dauda solidified when both of us joined the APC. With his support and others, I was victorious in the 2015 election that crossed me over from the House of Assembly to the House of Representatives.

In fulfilment of my promise to eradicate water borne diseases and provide clean safe drinking water for communities in my constituency, in my third year as member House of Reps I introduced Alh. Bahago of UB Water Ltd. to the Border Communities Development Agency where I domiciled my Constituency project for the year. All monies in the name of my constituency was, at my instance, credited to UB Water, the company that drilled 113 boreholes across Fufore/Song federal constituency.

I provided 56 bore holes in Fufore, my own LGA while I drilled 57 bore holes in Song, yet I was rigged out in the 2019 election in Song by my party. I shall, Inshaa Allah publish photographs of all these bore holes and where they are located on my Facebook wall in June 2021.

After UB Water had completed all the bore holes, I noticed that my Facebook friends from Nasarawo, late Dauda’s birthplace and many others from the neighbouring village of Furo, where late Dauda’s father came from, were making negative comments about me, accusing me of refusing to drill a bore hole in Nasarawo.

Dauda himself was making similar comments about me to some of the common friends we shared. I then realised that telephone calls between us was becoming far in between; and anytime I called, he kept the conversation short.

When I heard that late Dauda’s grouse with me was because I did not provide bore hole in Nasarawo, one day I went to his house to explain myself. From his countenance, it appeared to me he was not happy seeing me. Yet I sat down and told him that it was because he hardly visited his village of Nasarawo, much less Furo, and his connection to the villages was merely nominal that he was not aware that, at my instance, UB Water had searched for but could not find water in Nasarawo. I told him also that Nasarawo community had acknowledged that and had commended my efforts.

I told him too that a gentleman from Nasarawo had written to my inbox that one indigene of Furo that works with a water engineering firm had informed the villagers that he would find water there and that I sponsored the search which turned out negative.

I informed late Dauda that Alh. Bahago had told me also that they have to go down a certain depth that would cost me N10m before they could get water in Nasarawo and, if found, the water can not be drawn by hand pump and that we have to connect the bore hole to electricity.

I asked late Dauda to confirm from Alh. Bahago who I had informed that I had no N10m and I was not in a position to extend electricity from Pariya to Nasarawo which is a distance of more than a kilometre.

Despite my explanation, late Dauda remained very cold towards me. I felt bad but I resigned to fate because I could understand his frustration as in all the four elections I contested in my life, which I won in 2007, 2011, 2015 and 2019 (Fufore LGA only), I have never failed to win the Nasarawo polling unit. Then, I asked late Dauda, why on earth would I refuse to drill a bore hole for them?

After all, I also told late Dauda, I have drilled a bore hole each at Pariya cemetery, central mosque and Jauro jam inside Pariya town. And that in Pariya ward I have drilled one bore hole each at the villages of Garin Alhaji, Fuforeyel, Kadarbu primary school and Wuro Yolde, all within a kilometre or two radius of Nasarawo and I have never lost Nasarawo polling unit in the 4 elections that I contested.

I told him also that when UB Water could not find water in Nasarawo, I gave the community some money with which they maintained the open well that is still their only source of portable drinking water to date.

Late Dauda remained adamant and continued in his belligerence. Convinced that I have done my best and Allah will be the judge, I left him. I did not set my eyes on late Dauda until the date of the primary election leading to the 2019 election. He came to the election venue, which held in the night at the presidential lodge in Fufore with a former member House of Representatives. He was furious and shouting on top of his voice urging people not to vote for me.

As automatic delegates, late Hon. Dauda and his co-traveller, the former House of Reps member, voted against me in that 2019 primary election in which they wanted me to lose. But when the votes were counted I won by defeating Hon. Abdulmumini Song, who came second, Hon. Maikanti who came third while Yahya Saidu, Engr. Saidu Njidda and Baba Madawaki were 4th, 5th and 6th in that order. Before the result was announced, late Dauda and his co-traveller melted into the darkness as quietly as they came.

In the general election in February, he was even more belligerent but yet I won in all the villages he worked against me. I defeated the PDP in Fufore LGA by over 10,000 votes. I won in 9 out of the 11 Wards in Fufore and was second in Yadim the only ward ADC won and I was second in Uki Tuki, the only ward won by the PDP. In Song I won in Zummo,  Kilinge Funa and Kilinge Hirna Wards until Hon. Ali Idrisu (former Councilor of the third war) fraudulently cancelled the two polling units I won in Tasu Hausa.

Later in 2020 during the electioneering campaigns for the local government election, however, my wife’s younger brother Alh. Saidu Yahya Nuhu contested for Chairmanship of the Fufore LGA under the APC and I went to my ward of Ribadu to support him. When his delegation came and met me at the residence of Waziri Ribadu where we addressed the rally, late Dauda was the Director of Saidu Yahya Nuhu’s campaign organisation. He was back in APC, the party he helped founded and nurtured with others.

When he held the microphone, he spoke about me in superlative adjectives and described me in suave language that made me shade tears. He said publicly that I should forgive him and all those who did not vote for me in the 2019 election as he never knew that the person they voted for would be worse.

Just like the way I said of late Njidda Pariya, I must say that in my relationship with late Alh. Dauda Bello Furo, ‘siyasa bata yi ba’. If I knew that late Dauda would die before me, I would have gone to him and asked him for forgiveness after I lost the general election in February, 2019.

But that’s politics. In it, as in life, friends part to meet and meet to part to meet no more. As we parted at the palace of the Waziri, though our politics had met once again, late Dauda and I never met physically until his death.

Even today as I finished writing this and looked at this picture of me and late Dauda seated on my right at the Presidential lodge in Fufore as I addressed party faithfuls in 2016, I cried. The way he was looking up to me in this picture tells an even bigger story than what I wrote here about late Hon. Alh. Dauda Bello Furo of blessed memory. I know that he was only angry with me in 2019 because of his people, but I know deep down he loved me so much.

Late Dauda was gentle and kind. Anytime he spoke, he spoke from his heart. I am sure he never meant to hurt me by refusing to vote for me at the primaries and at the general election in February, 2019. He was only overwhelmed by emotion because all the villages where I drilled bore holes are close to Nasarawo, his birthplace. He thought I deliberately refused to drill a bore hole and provide safe drinking water for his people who he loved better. I am sorry.

Dauda am Allah yaafe, Jaumirawo feuni ne. Ubangiji ya jikan ka, yayi maka Rahama. Allah ya baka gidan Aljanna, for you were a real brother who was true and kind to me, ni ‘kanin ka’ Sadiq Ibrahim Dasin.

Rest in Peace my brother.

Nigeria: It’s Hard to Believe Anyone Is in Charge in Nigeria – Soyinka