Not the military, the President has failed us, Gov Zulum is being economical with the truth - Northern Youth 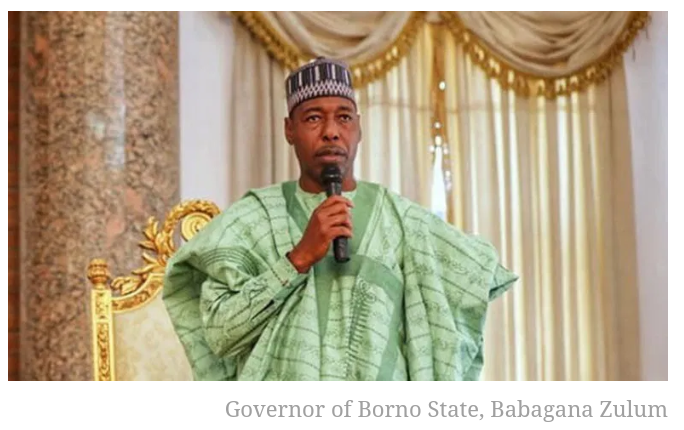 * If the army cannot protect people travelling within a distance of only 20 kilometres, then I cannot foresee the capacity of the army ending this insurgency any time soon

The Governor of Borno State, Babagana Zulum, has blamed the recent spike of abductions along the roads leading to his state on the Nigeria military, even as he stressed that the people are being killed because the army has failed to do their assigned jobs.

Mr Zulum was reacting to last weekend’s abduction of 35 travellers and many other such incidences that have become a daily occurrence on Maiduguri-Damaturu road, the only safe route that leads to Borno State.

The governor, on Monday, visited the location where the 35 travellers were abducted to inspect the level of destruction perpetrated by the Boko Haram.

The governor spoke to journalists at the scene of the attack, expressing shock and annoyance on how such magnitude of attack was being perpetrated under the watch of the soldiers and police special squads deployed to protect the highway.

“It is sad and mind-boggling how innocent commuters are being kidnapped and killed on this Maiduguri – Kano road, especially the road linking Maiduguri and Damaturu. It is also very annoying to note that these atrocities are being committed between Jakana and Auno, a distance of only 20 kilometres.”

“Surprisingly we have a Brigade Commander with his team in Jakana; we also have a commanding officer with his battalion in Auno; both teams cover a distance of only 20 kilometres, and they have failed to protect the commuters.

“The Nigeria Army has failed us; they have failed in discharging their role of protecting the commuters.

“This morning while travelling from Maiduguri to Jakana up to Auno, I did not see or sight any single soldier. Even the police-led Rapid Response Squad (RRS) that we established and equipped and enabled to patrol this highway were nowhere to be found on the highway. Instead, they are busy harassing and collecting money from innocent travellers, both police and soldiers.”

“This is embarrassing. Just look at the number of vehicles that have been burnt here, yet we have our soldiers there watching and collecting money from commuters.

“The irony of the whole thing is that no one dares to speak the truth; if you do, they would soon be out to condemn you.

“If the army cannot protect people travelling within a distance of only 20 kilometres, then I cannot foresee the capacity of the army ending this insurgency any time soon.”

The governor said that despite the setbacks he would be convening an emergency security meeting as soon as he returned to the state capital.

In between this stretch, there are identifiable cattle routes that the insurgents use. Also, at both ends of the danger zones, there is a military deployment.

Travellers who must use these routes are only safe to do so between 8 a.m. and 2 p.m. The insurgents usually take charge of the highway from around 2 p.m. till late in the evening. Most of the victims of the attack are late travellers, especially those coming to Maiduguri from long distances; or those who set out on journeys very early in the morning.

Mr Zulum, since he assumed office last year, has been very vocal in his criticism of security agencies anytime he feels they are not performing.

The Borno governor, who sometimes ignores security advice to visit troubled parts of Borno State, once accused soldiers of deliberately attacking his convoy to prevent him from reaching a troubled fishing community in the state.

The army, however, said the attack was carried out by Boko Haram, the terror group that has been carrying out attacks in North-east Nigeria since 2009.

The Boko Haram insurgency has caused over 40,000 deaths and displaced millions of others, mainly in North-east Nigeria

While reacting, the northern youth group, said that it was not the Nigerian army that has failed the country, but President Muhammadu Buhari who was elected to fix the rot as he has promised, who is the chief security officer and has confidence in the security chiefs whom the general outcry regarded as those who have overstayed their welcome, adding that governor Zulum was simply being economical with the truth.

ADAMAWA: Bishop Mamza does not wait till January, shares N10,000 each to 200 PLWD