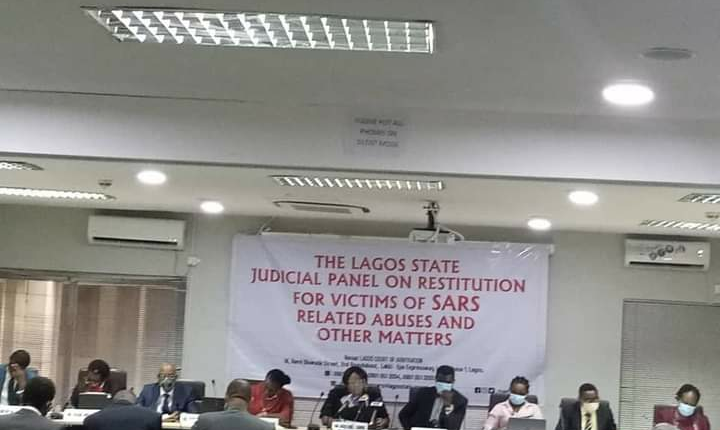 The Lagos State judicial panel on restitution for victims of SARS related abuses and other matters today adjourned hearing to January 22nd 2021 in a petition brought before it in the case of Mrs. Abimbola Bakare vs Federal Special Anti Robbery Squad (SARS).

When the case was called, the petitioner though present in court could only communicate in the Yoruba language and due to the absence of the panel interpreter, the panel had no choice but to adjourn the matter.

Same fate as above befell the petition of Salami Adekunle Atoba vs Federal Special Anti Robbery Squad SARS due to his witness who could only communicate in the Yoruba language and due to the absence of the panel interpreter and so, the matter was adjourned to 22nd January, 2021.

Most cases of the 15 for mention today Tuesday 22nd December, 2021 suffered adjournments due to the absence of petitioners and their counsel and in some cases, petitioners had no counsel and on being briefed about the offer of free legal services by the Nigeria Bar Association, they elected to take up the offer, but the NBA representation then requested for time to be properly acquainted with the petition, which was granted by the panel in the interest of fairness and justice.

The major highlight of the day was the case of late Mr. Kolade Johnson vs Federal Special Anti Robbery Squad (SARS).

Late Kolade Johnson was killed by men of SARS around Mangoro area of Lagos Abeokuta expressway. The petitioner counsel called a witness who testified to the killing of late Kolade Johnson by a SARS operative by name Ogunyemi Olayinka in company of his colleagues.

The witness claimed to have been beside Kolade Johnson, his neighbor when he was shot to death by the SARS operatives, that it was providence that saved him from untimely death on that day.

Under cross-examination by the respondent counsel, the witness affirmed that he and 5 others were invited to the Lagos State police command headquarters for an identification parade of the suspected killers of Kolade Johnson. He claimed that though the officers when identified at the parade denied being the one’s, but the video footage of the incident exposed them.

The respondent counsel under cross-examination of the witness, made it known that the said officer was dismissed and arraigned in court, while his colleagues were demoted, the witness affirmed being aware.

Thereafter, the respondent counsel asked the panel to dismiss the petition because the police authorities had done the needful with regards to the misconduct of its officers, hence there was no need for the petition, but the petitioner counsel objected and his objection was upheld by the panel.

The witness Nana Samuel was asked to step down from the witness box and the matter was adjourned to 21st January, 2021.

In another matter of day in Deacon David Komolafe vs the Nigeria police force. The parties were present in court with their counsels, but the panel counsel informed the panel that the petitioner had already been awarded damages cost against the Nigeria police force by a court of competent jurisdiction and asked for the matter to be struck out, but the panel objected saying that the focus is on the enforcement of the judgement. The panel then admonished counsel to discuss on the way forward and thereafter adjourned the case to 15th of January, 2021.