Guyuk Cement Industry; a dream come true with the signing of pact between BUA Group and Sinoma CBMI

* State Ministry Of Mineral Resources Has Got A Worthy Achiever; Hon Bappa Dalhatu Isa, A Strategic Thinker, Who Work The Talk, Advices On Turning The Mineral Resources To Finished Good For Greater Revenue Generation - The Periscope 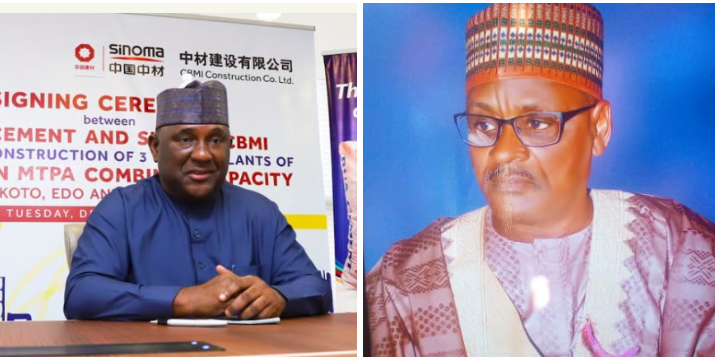 The dream of having a Cement factory
established in Guyuk is gradually becoming a reality.

This followed reports that the BUA group has already paid for the equipments needed for the project.

It could be recalled that the Adamawa State Commissioner Mineral Resources Alh. Bappa Dalhatu Isa had confirmed the commitments of the the Adamawa State Government and that of the BUA group in establishing the cement factory in Guyuk and as part of its effort to actualise the project, His Excellency the Executive Governor of Adamawa State Rt. Hon. Ahmadu Umaru Fintiri constituted two powerful Committees to drive the process and ensure the delivery of the project.

The two Committees are, the Standing Committee under the Chairmanship of the Secretary to the State Government and a Technical Committee headed by the Commissioner Mineral Resources.

The Committees were mandated to work closely with the BUA Group and the Guyuk Community Leaders with a view to working out the necessary agreements and ensure that the project is actualised without any hitch.

When completed, according to the Commissioner, the factory would provide 3 million direct jobs and 5 million indirect jobs.

The project which is about 3 times the size of Ashaka Cement will certainly turn around the fortunes of Adamawa State in general and Guyuk Community in particular.

The Commissioner also promised that any agreement that would be signed would have the interest of Adamawa State and that of the Guyuk Community adequately protected.

A Team of Geologists from the BUA Group has been in Guyuk for the past six weeks carrying out Core drilling activities to ascertain the amount of limestone deposits in the area.

The exercise will also determine the factory site.

Now that BUA Group has signed a contract for the construction of three (3) factories in Sokoto, Edo and Adamawa States, the dream of the State Government is fast becoming a reality.