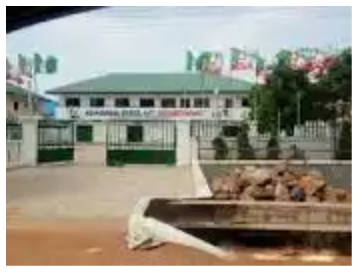 The All Progressive Congress (APC) in Adamawa state Friday, accused the ruling People’s Democratic Party (PDP) led government in the state for ‘’masterminding‘’ the raiding in its Yola secretariat by the officials of the National Drug Law Enforcement Agency (NDLEA).

11 suspected drug peddlers were alleged to have been arrested at the APC secretariat along Galadima Aminu Way in Yola, the state capital.

APC’s state acting organising secretary, Ahmad lawal alleged that the raiding and arrest have political undertone, as ‘’all political parties have their youths, why only our party, APC will be targeted?’

“This is coming to us as a surprise because we are not aware. We just heard information that an arrest has taken place in our secretariat.

‘’It’s expected that if there is anything there, the first person to be notified is the party leadership, we expected NDLEA or any institution to write to us that something is going on or happening there but not just to enter someone’s house and make arrest without the knowledge of the owner of the house.

‘’So, it came to us as a surprise and we don’t know what happened and we are now investigating to know what really happened that warrants the arrest in our secretariat.

‘’The arrest is politically motivated; this is coming as we planned to hold a mass rally but we were stopped by the state government and suddenly we saw arrest.

‘’So, if you compare this with what’s happening, definitely one can agree that it’s politically motivated.

‘’No, warrant of arrest, and why only APC? Other parties also have their youths that do converge at the party secretariat,’’ Lawal fumed.

Commenting, NDLEA state command maintained that the arrest followed tip-off, as  substances suspected to be illicit drugs were equally discovered when the officials of the NDLEA searched the premises of the Party Secretariat.

“There was an arrest at one of the party secretariat, illicit drugs were discovered and investigation still going on, though by next week we will make a press briefing on this and other successes recorded in recent times,” Mohammed Idris, NDLEA’s Commander has said.

Reacting to the allegation that PDP led government was the mastermind behind the raiding and arrest, the press secretary to the Adamawa state governor, Mr. Humwashi Wonosikou identified lacuna in the allegation.

“Lawal earlier said they didn’t know what happened but they were investigating at the same time he concluded before rounding up their investigation by claiming that the arrest of criminals with exhibits at their party secretariat was politically motivated, where he accused state government as being the mastermind.

“The question is, where were the state executive and/or staff members of the APC who should have been in their offices at the secretariat when the arrest was made along with the exhibits?

“Lawal shouldn’t politicise criminality, NDLEA is a federal security agency doing what it knows best how to do, independent of the state government or political party affiliation,” the Press Secretary said.

Taraba Where Commissioner Of Health Donates Motorised Borehole To Own Community