* If the Sen Abbo did not see the numerous projects across all the sectors of human endeavours, discerning people of the state are witnessing the milestones being recorded and are appreciative - Press Secretary 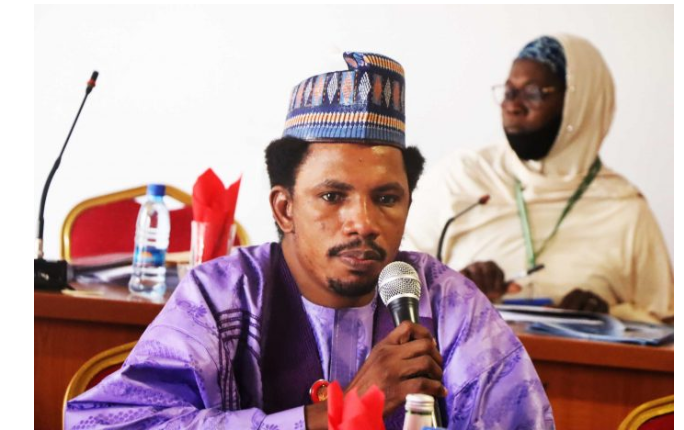 The 2023 electioneering atmosphere begins in Adamawa state with defection, some of which are defective by the defeated, lacking principles. Some of which by the aggrieved who lament being sidelined after the election and/or the victory they have laboured to make. While some of which are based on the reconciliation to return to the Mr Hardcastle’s old house and make a home, moralising Oliver Goldsmith’s play, “She Stoops to Conquer”.

PDP it was that started receiving decampees in the state, whom she said their parent political parties could not get to sustain.

However, the decampees to PDP are for the most part, said to be politically law profile, having infinitesimal constituent-situational influence, factored into the government as either advisers to the governor or board members.

The politically high profile, among whom are former governors, gubernatorial aspirants in the state and the elected senator are said to have comprised the decampees to the APC to join the other titans.

They are said to be among the principal protagonists who masterminded the defeat of the former governor Bindow Jibrilla at the poll with the “O JIPPA TAN,” like the “OTOGE” slogan of Kwara state.

“O Jippa Tan” was launched by Nyako in Maiha local government, where Bindow was said to have hailed from but not his political constituency. Where he attempted to disorder the monarchical order but was prevented by the court of law, whose order he would not honour.

Jalingo-Maiha where the O Jippa Tan was launched, is presently not comfortable with the Fintiri led government over the same matter that put a cross between the electorates and the former governor; it is now over three months that the Appeal Court verdict, which upheld the High Court judgement passed over two years ago that decided the legitimate district head was passed, yet no one could explain to the electorates, convincingly too, the reason for the undue delay in implementing court order by the governor, whom they said ought to have since approve the appointment of their district head.

It seems the team players are regrouping under APC, having been said to be disenchanted with the Fintiri kind of fresh air they considered as dusty and suffocating, which cost has milked the state treasury lean without reflecting positively on the state and the citizenry.

There is also the challenge posed by the rPDP, led by Dr. Ardo who are disagreed with the PDP executive members in the state

Fintiri should take his fresh air out of Dougirei Hill as a tenant who should also serve a single tenure, the chanting would relate, as the agitation has just started.

Could the minimum wage, the employment, pension payment, free education policy, flyovers, some hospitals and roads rehabitation awarded projects along with peace and security measures salvage the situation by guaranteeing support to the Fintiri’s of the electorates, when they were also part of the bond of contention? 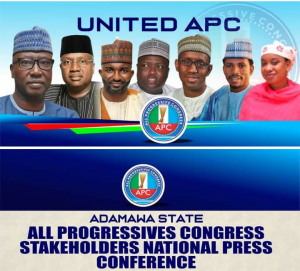 The senator representing Adamawa north senatorial zone, Ishaku Abbo elected under PDP but decamped to APC, has disclosed his party’s resolve to wrest power from those he termed as “kleptomaniacs,” come 2023.

The senator who made the statement during a stakeholders national press conference in Yola Saturday, said he joined the All Progressives Congress (APC) not to seek power but to right the many ills brought about by the current PDP government in Adamawa State.

“Some of us are thinking senator Abbo came into APC to contest for governor. I joined APC so that I can help champion a better Adamawa state for my own children.

“Nobody among us here is after becoming a governor or senator or house of reps members we are after the interest of Adamawa state.

The senator said he was not afraid of making such statement adding that as a legislature, he has no immunity and could be sued.

He regretted that when the governor served in acting capacity for 76 days, he nearly sold the government house adding that in his nearly two years as the governor of Adamawa State, Fintiri did not commission a single project.

“In his nearly two years he has not started, completed and commissioned any project,” he said.

Responding to the allegation, governor Fintiri’s press secretary, Humwhashi Wonosikou said the senator is entitled to his opinion.

Wonosikou noted that as a high ranking legislature, the senator should know the import of his statements and should be ready to defend such statements should the need arises.

On the issue of projects, Wonosikou said the governor was taking his time to institute solid projects for the benefit of all citizens as such he was not in a rush.

He noted that if the senator did not see the numerous projects across all the sectors of human endeavours, discerning people of the state were witnessing the milestones being recorded and were appreciative.