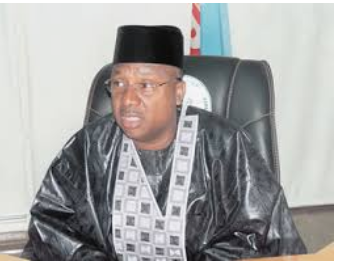 Recent actions and utterances of former governor Muhammadu Umaru Jibrilla Bindow have been given stakeholders of the All Progressives Congress goose pimples and sleepless nights, because the former governor betrays no emotion in speaking from both sides of his mouth.

Rightly or wrongly, a number of stakeholders believe that Bindow is a Janus-faced traitor, and Fintiri’s political factotum in APC whose sole purpose is to rock the ship of the party for self serving motives.

Such actions of the former Governor have made a number of stakeholders to take his utterances with a pinch of salt as they did not only doubt his sincerity but believe that his touted loyalty to party is questionable.

Is it not preposterous for a man who rode on the crest of the party to power for four years to ask members of the same party in the state not to criticize the current ruling party despite its numerous shortcomings?

The fact that Bindow has become a master of doublespeak who has been championing the cause of PDP in his private and public engagements, instead of charting a course for his party’s victory ahead of the 2023 general election is indisputable.

Simply put, Bindow has uncannily transformed to an incorrigible apologist of the PDP sparing no effort to defend the ruling party, its government and the governor whenever an opportunity to do so presents itself.

The fact that the governor proclaimed to be a member of the APC and campaign for the PDP even at the party secretariat has been both befuddling and confusing as the action betrays lack of conscience, humility and the needed dose of loyalty expected from an individual that benefitted so much from the party.

Why the former governor refused to shift tent with his new found love so as to conveniently and openly campaign for it, remained puzzling.

It is on record that the former governor has in recent times become so much obsessed with defending his new hobby to the extent that he felt no qualms about the notorious image such endeavour is giving him. Simply put, Bindow seems too preoccupied to notice that his actions are earning him general rebuke and portraying him as everything wrong in the APC.

Since he came back into the state almost two years after he was ousted from power, by the PDP behemoth, Bindow has poignantly maintained the posture of a sellout, dining with the APC in the morning and sleeping with the PDP in the night.

Bindow’s comments during his first visit to the party secretariat was the icing that portrayed his innermost biases and insincerity towards his party.

Otherwise, how can Bindow appeal to party members not to criticise the Fintiri-led government despite its many failings?

Many were angered by the rather awkward comments made by Bindow whose government had received a number of hard tackles from Fintiri who in expressing his disgust about the level of economic malfeasance that took place under Bindow even promised to investigate him.

But instead of paying Fintiri in the same coins, Bindow suddenly lost his voice when it mattered most and to the chagrin and consternation of all and sundry the former governor chooses to become the mega phone of his traducers.

“Adamawa state Governor Ahmadu Umaru Fintiri is my younger brother, friend and confidant. I will not be a party to anything that will spoil or portray his government in bad light and I will not encourage anyone to do so. The Governor is doing his best and needs the support of all citizens to succeed,” was all that Bindow could muster to say during his first home coming to the party.

The fact that many people were not happy with such crestfallen partisanship and open support for the enemy immediately reverberated as both the state chairman of the party Ibrahim Bilal and the deputy publicity secretary of the party, Mohammed Mayas openly told the former governor that nobody could prevent them from criticizing a government whose performance was to say the least abysmal.

Many believed that Bindow’s quest for political survival has been largely responsible for his strange posture. But unknown to the former governor, the impropriety of such actions have been stirring the hornet’s nest and currently causing seismic ripples in APC as Bindow’s subterfuge became the most topical issue in Adamawa APC circles.

There is a general belief in the party that for the expediency of political correctness, and self preservation, Bindow is willing to offer his party as a sacrificial lamb.

To elucidate their point, those making such postulations are insinuating that, the ex-governor has collected huge kickbacks from Fintiri to help him destroy APC on the premise that the ex-governor will be rewarded with the senatorial ticket of Adamawa north senatorial zone, so as to fight governor Fintiri’s arch enemy, Senator Ishaku Abbo who has become a torn in the governor’s flesh.

It is believed that even the tour to the various chiefdoms and emirates embarked by Bindow recently were craftily conjured and bankrolled by the Fintiri led state government.

Many in the state believed that Bindow’s tour has received the blessings and imprimatur of governor Fintiri, otherwise, it remains doubtful if those chiefs and emirs who are in total obeisance to the state governor and are seriously afraid of his fury will host Bindow with so much exuberance and fanfare.

Buoyed by the belief that a fifth columnist in the party has promised to offer it to him as sacrificial lamb, the governor during a chat with newsmen after his return from his annual leave ecstatically and forcefully said there was no opposition in the state when reporters sought to know what he feels about the rising profile of the APC in the state as witnessed by the high profile defections.

The response that Fintiri gives to the effect that there wass no opposition in Adamawa State was the icing that portrays the governors innermost beliefs that with Bindow in tow, there is no opposition in the state.

Suffice it to offer Bindow a candid counsel so as not to fall prey to the antics of Fintiri like Modi and co-travellers who are now licking their wounds after being ditched by the governor who made mouth watering promises to them when he was looking for their support but conveniently discarded them after he became the governor.

Many discerning students of power believe that Bindow is trading on a landmine laden path and the earlier he capitulates and takes a more honourable path, the better for him and APC.

It will be a great disservice for Bindow to succumb to the diabolic antics of the PDP government at least for posterity sake.

Gidado sent in the piece from Yola town