Almajiri is a student not a street beggar, group reacts to Kaduna task force clampdown on members 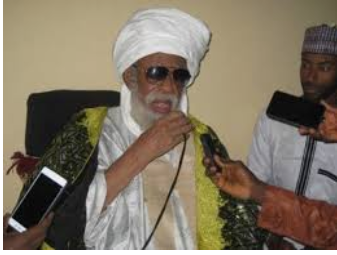 The aggrieved Almajiri group expressed their dissatisfaction over the clampdown of their members in Almajiri students by the Kaduna task force, at the residence of Sheikh Tahir Bauchi and other slate oriented school.

In a press release jointly signed by Yusuf Abdulghaffaar and Ibrahim Garba, the group said Almajiri system of education should not be linked to street begging with the aim of abolishing it

Below is the full text of the group’s reaction:

Being a text by Concerned Almajiris in reaction to the Unwarranted and Unjustified Arrest of Students and Persons in the Residence of Mawlaana Shaykh Tahir Usman Bauchi OFR (RTA) on the 14th of January, 2021 in Kaduna State.

Sequel to the recent illegal, unwarranted, and unjustified invasion of the residence of Mawlaana Shaykh Tahir Usman Bauchi OFR (RTA) on the 14th of January, in Kaduna State by members of the Anti-Begging Task Force under the Chairmanship Major Yahya Rimi (RTD), we wish to clearly express our dismay on the abuse of the fundamental human rights by members of the task force and the Kaduna State Government.

The Chairman of the taskforce was reported to have said in an interview by Sahelian times all the northern states including Kaduna have signed the anti-begging law. “The law has given us the power to arrest all Almajiris in state and deport them back to their respective states.” Rimi added that for those that are found to be from other neighboring countries, the task force will hand them over to the Nigerian Immigration. “The arrest of Shaykh Tahir Usman Bauchi’s students is just the beginning. We are going round to all the Almajiri Schools in the state, and will arrest all the Students we find there,” he added.

When asked about indigenous Almajiri students, the Chairman said that the governor of the state, Nasir El-Rufa’i, has given them go ahead to take them to their respective local governments and enroll them in primary and secondary schools.

We therefore deem it fit to bring to the notice of the Kaduna State Government and also the Chairman of the Task force with respect to his statement the followings:

1. Besides the fact that this statement is not meant to discuss the Almajiri phenomenon, it is pertinent to state that Almajirci system is basically and fundamentally a Formal System of seeking the knowledge of Holy Quran (which entails learning its writing, recitation, memorization and in turn reproducing if from heart) and Islam in its entirety. It is therefore far from Street Begging, Child Labor, Child Neglect, Child Abuse amongst other Societal Social and Moral Ills.

2. An Almajiri is an individual who migrates from one place to another in search of knowledge (most importantly of the Holy Quran and other sciences of Islam).

3. There are a good number of Almajiris who are self dependent, dependent on the care of their parents and guardians, and as such considering Almajiris as beggars is one of the highest display of ignorance, sentiment and prejudice towards the Almajiri system.

4. The Anti begging law should be busying itself in arresting BEGGARS and not STUDENTS OF THE HOLY QURAN. Begging has nothing to do with the students of Holy Quran instead it is a manifestation of the failure of Government to provide citizens with Security (as some of the perceived beggars are internally displaced persons who are displaced as a result of insecurity), Job opportunities, Scholarships, and other essential needs of the citizen.

5. The Kaduna State Government should look deeply at the causes of Street Begging which will assist in proffering lasting solutions to the phenomenon. Identifying the causes of Street Begging will also help in creating a most favorable approach to solving this menace than cutting a tree at the top instead of uprooting it which will likely take the cause of time to grow bigger than it was.

6. It is clear from the statement of the Chairman that the Kaduna State Anti Begging Task Force does not have a term of reference and if it does, it is an OUT OF FOCUS, SCALAR AND HIGHLY INCOHERENT one. This is clearly spelt out in his statement above. Instead of engaging yourself with arresting beggars (in the process of begging) you were busy invading peoples houses. What a high display of unprofessionalism and abuse of fundamental human rights.

7. Almajiri has a fundamental and constitutional human right which avails him the freedom to live and reside in any place of the world as a peaceful entity.

8. The Almajiri System succeeded in giving the people of Northern Nigeria (of which Kaduna State is a Component) the best of Civilization through which a Standard System of Knowledge Seeking, Standard Court Systems, System of Marketing and Transactions amongst others were properly in existence and practiced before the invasion of the region by Colonialists. In fact, this to a great extent earned the Northerners a great respect from the Colonialists but today it suffers neglect from the side of Government and other Stakeholders as a result suffers set back.

9. It is our duty to bring to the notice of the State Government that there is no perfect system anywhere (not even the present system of governance). As such, the Almajiri System doesn’t deserve to be banned by a Government which claims to strive to educate its citizens instead, in cases of assumed irregularities, appropriate solutions should be provided to such irregularities and the system be preserved.

10. The western system which the Governor advocates is also not free from flaws and irregularities such as Cultism, Prostitution, Sexual Harassment, Drug Abuse, Gender Based Violence which pose a threat to the security of life and properties and it is quite pathetic how and why it is not the talk of the town, not even anyone having the thoughts of advocating for its ban. Is it because it appeals to the sense of enslavement of the western world?

11. We are aware of the fact that the study and memorization of the Holy Quran in Northern Nigeria is regarded as posing a threat, anxiety and fear to the enemies of the Holy Quran (some of who disguise as Muslims and some are non Muslims). This is because twenty four hours is more than enough for the Holy Quran to be reproduced in cases of need because the Almajiris have it at heart. Therefore, the divine statement that the Holy Quran will be divinely protected has been an issue for these enemies who have been unveiling different methods of altering the Holy Quran without a little success and will never succeed of course. After all failed attempts, the next stage of the conspiracy is to coin out different media of operation.

12. Invading the house of a globally renowned Islamic Cleric, Peace Lover and Preacher, Elder Statesman, Quranic Legend and Hero, Revered and Charismatic Enigma and above all Law Abiding Mawlaana Shaykh Tahir Usman Bauchi at about 12 am , firing tear gas on peaceful and sleeping students is highly unwarranted and unjustifiable and a clear abuse of their fundamental human rights at a time the Kaduna State Government is to be busy consulting elders and scholars of high repute on how to bring an everlasting solution to the present security challenges it is facing. This could or may be interpreted as a misplacement of priority and trivializing governance.

In the wake of the above, we call on members of the task force to adopt a humanly method of carrying out their job.
Conclusively, Mawlaana Shaykh Tahir Usman Bauchi is a COMPLETE LAW ABIDING CITIZEN who has contributed his own quota to National Development which may be termed as one of the reasons for him being awarded OFR, invading his residence at that odd time of the night is quite not what we expected from a task force that is supposed to be playing a lead role in a civilised and digital world of today.