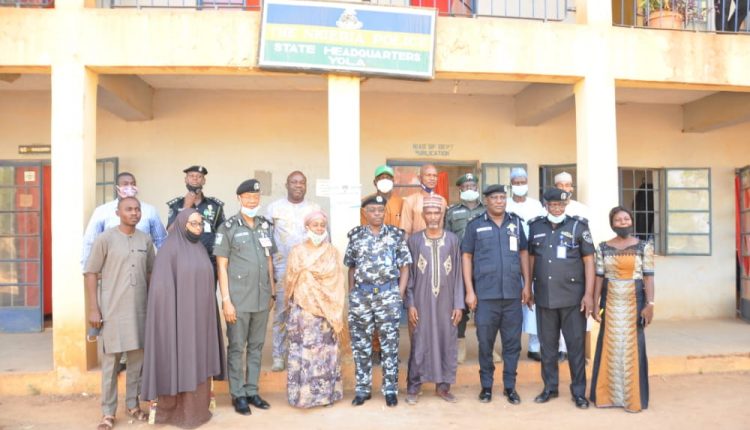 The new Commissioner of Police, Adamawa state CP Aliyu Adamu Alhaji has commended the activities of the Adamawa Coalition Against Rape ACAR.

The commissioner made the commendation Tuesday during a courtesy call paid to him by the group in his office at the the Adamawa State Police Command Headquarters in Yola.

The new CP, the PPRO Sulaiman Yahaya Nguroje would explain to the group, is the only officer with three “A”s acronyms, incidentally deployed to Adamawa state, giving him the additional “A” acronym, which stands for distinction or excellence in crime prevention and detection as a professional detective, with effective and efficient leadership style.

ACAR, led by the convener, Hajiya Asma’u Joda welcomed the new Police Commissioner who is proactive, having political will and so tough on criminals with the several arrests of the Shila cult members and kidnapper kingpins in less than 10 days with the assumption of duty.

Joda explained that ACAR is coalition of Civil Society Organisations (CSOs) and media practitioners in Adamawa state that have formed a formidable and allied force against rapists, considered by the Adamawa state governor as not to be spared cultists and other predators involved in other sexual assaults.

ACAR was formed in protest against the raping of a five-year old baby by one Abbati, earlier said to be nineteen years before the age was reduced to sixteen to evade jail terms for remand home, which led to the group’s inaugural march against rape on September 18, 2019, demanding justice for the survivor.

ACAR march against rape was to be the first in the country. Adamawa State Police Command was the first point of call followed by the office of Attorney General and Commissioner of Justice of the state, before being received by the Adamawa state governor at the government house and terminated at the state house of assembly where the group was received by the Honourable Speaker in company of other state lawmakers.

Joda reiterated that war against rape and other related abuses is a collective undertaking that the entire stakeholders must unit to fight.

“Government and her agencies, security and judiciary are expected to take the lead in fishing out the culprits.

“The civil society undertakes to support government in this pursuit of making the society safe for all and at all times.

“You have been deployed to Adamawa state at a time when rape has become pandemic, worse than Coronavirus and any other vice in the country and is soaring to the clouds.

“The media are playing their part in reporting the police command’s commitment in combating the dastardly act, while the CSO’s are taking every opportunity to meet the expectations of the voiceless and ensure justice for them.

“While we commend the support of the police at the top management, we also have to register our dismay over the compromise by some of the lower ranks who joined in the conspiracy to frustrating the war by getting rape cases settled out of court that often shortchanged the survivors for which we want you to look into,” Joda said.

Dr. Adamu Muhammad Dodo, representing the media in the ACAR added that based on the philosophy of “say something when you see something,” not to be claimed by the conspiracy of silence, ACAR served as whistleblower and as voice of the voiceless in helping the security agencies identify rape and other crimes associated with sexual assaults.

Dodo however lamented that the role played by ACAR is often rather sarcastically misconceived, as any rape case reported by ACAR or encouraged by ACAR to have it reported is taken as ACAR’s case, thereby arrogating to the group the role of the survivor, where he called for the change of such narrative.

The CP assured that crime prevention such as rape cases, remained the command’s commitment, which he led, where he said they have studied the ACAR activities vis-à-vis the cases of rape in the state with a view to nipping it in the bud.

In response to the conspiracy on the side of some officers and men to frustrate before rape cases could go to court, the CP drew an analogy with the GBV desk officer in Bauchi state police command who failed to record any rape case or sexual assaults reported. He would therefore have to substitute the desk officer with her more serious and committed subordinate.

The collaboration with any officer to frustrate rape case from prosecution would be intolerable in Adamawa state as much as it was not tolerated in Bauchi under his watch, the CP assured.

The CP has however observed that the police are for the most part, obnoxiously accused of the weaknesses meant for other organisations, where he explained that it is one thing for rape case to be reported to the police, arrest to be effected, investigations to be thorough and submitted for prosecution, it is yet another for the case to have a fair hearing in the court of law for which the police have no hand in the court determination.

“It is baffling you know, sometimes a criminal will be arrested by the police, investigated and declared guilty before the law. The next is the said criminal to have been serving jail term will be released on bail only to commit the same or worse offence. He will be rearrested only to be on bail repeatedly. Though the police will have no hand in setting the criminal free, she is still blamed,” the CP would explain.

The CP suggested that crime fighting is a collaborative thing with everyone and every organisation playing her individual in a collective roles. ACAR should try and reach out to the judiciary handling rape cases with the same message against the predators.

Earlier, ACAR explained that they identified stakeholders that would be revisited, judiciary was one of the stakeholders.

The CP graciously welcomed the collaborative initiative between the ACAR and the Adamawa State Police Command as he was humbly welcomed to Adamawa state.