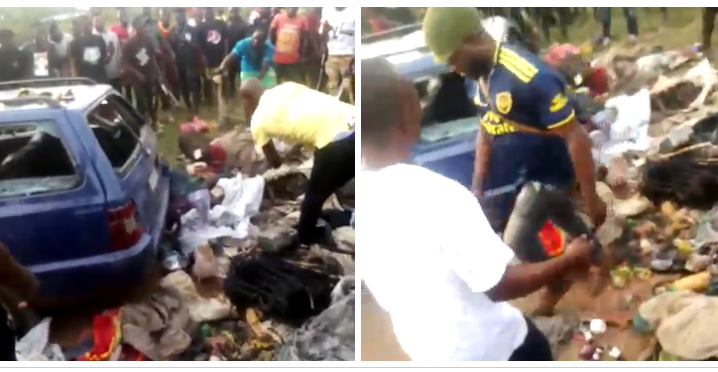 While the world is focused on the #LekkiTollGateProtest, Fulani herdsmen and northerners have been continuously killed in the southern part of the country.

Two weeks ago in Abia state, the  ESN – Nnamdi Kanu’s foot soldiers were on rampage killing Fulani herdsmen, their cattle & setting their settlements ablaze, with impunity in the dead of the night. IPOB leader Nnamdi Kanu shared the video himself on his Facebook page; so look to challenge me elsewhere.

Sometimes in January this year, the ESN incinerated fulani herdsmen settlements in Ebonyi, claiming that they were “illegal structures”. Some News outlets reported loss of lives in altercations that later ensued, where properties worth millions of naira were eventually said to be destroyed.

In the same vein, the Amotekun murdered and mutilated seven innocent Fulani herdsmen at Tapa in Ibarapa Central Local Government Area of Oyo state, about ten days ago.

Some Yoruba leaders gave excuses that the casualties of ethnic cleansing were kidnappers. However, subsequent events and investigation vindicated the victims; they were innocent herdsmen who were targeted for no other reason than being Fulanis.

Last week, Sunday Igboho visited the Yewa axis of Ogun state on Monday, instigated and spearheaded a group of irate youths not only to burn down Fulani herdsmen settlements and kill their herds of cattle but also to ensure that no herdsman in the forest flees for his life.

And just yesterday, Saturday, vehicles were reportedly stopped, non-Yoruba speakers of northern Nigeria origin were maimed with some killed.

Dangote trucks were also said to be burnt down in broad daylight, with the security agencies turning a blind eye.

The list of the ethnic profile occasioned by Fulani hate speech taken as a theology to proselytise, is painfully endless.

Those beating the drums of ethnic war with their covered sponsors and those who in their imagination conceive that the President, being a Fulani man is protecting his tribesmen, his kith & kin can now see how the lives of the Fulani, particularly the herdsmen, become worthless under his watch than his predecessors.

This gives ground for many to nurture the believe that insecurity under the present leadership is any agenda rather than incompetence.

Yes  I’m neither President Buhari, nor Bashir Ahmed or Femi Adesina but please allow me to welcome you to Nigeria, where “illegal arrests of protesters” is a bigger crime & harbors more outrage than the killing & destruction of livelihoods of the Fulani people.