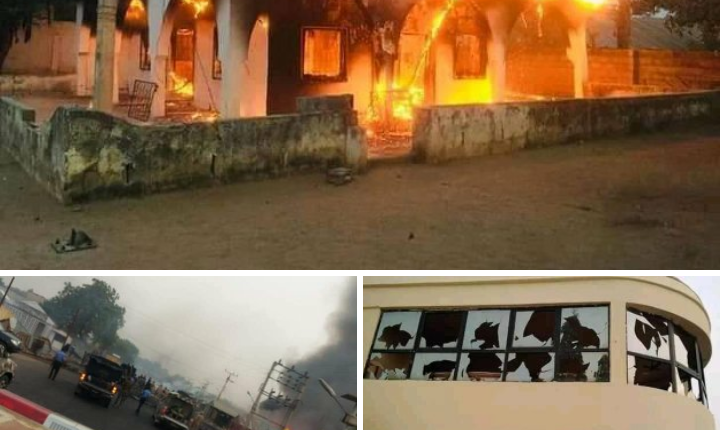 The scandal that followed the delayed appointment of the new Mai Tangale, the traditional ruler of Billiri, a local government in Gombe state, northeast Nigeria, took a new violent near anarchy calling for state of emergency dimension that resulted to the imposition of 24- hour curfew.

The monarchical violence has caused some casualties, houses and traditional granaries along with grazing areas are touched.

Some of the protesters who responded, to the Periscope reporting anarchy in the monarchy pointed out that they would stop at nothing in their protests against executive imposition of traditional headship.

According to the protesters, for peace to be restored in Billiri chiefdom, Gombe state Governor Inuwa Yahaya must declare Dr. Musa Maiyamba, who was voted by 5 out of 9 kingmakers, as the remaining four kingmakers voted 2 each for Ahmad Magaji and Mr Danladi, the other contestants

“This is a democracy that gives mandate to the voted by the majority; a process that produced Dr. Musa Maiyamba for scoring the highest votes. The governor must do the democratic needful by giving to the chiefdom their legitimate chieftain”, one of the leading protesters said.

However, explaining the selection process, an elder within the Billiri traditional council said “it is the prerogative of the governor to appoint one from the selected three recommended by the kingmakers.

Besides, the governor is even yet to appointment a chieftain to the Billiri chiefdom, we wonder why the conspiracy for the anarchy.

“The anarchists who could be impatient to, are not asking the governor as to the reason for the delay in the appointment of Billiri chieftain, they are harming people, destroying people’s property for reason of unverified insinuations, gossips, jests and side talk intended for acrimony and anarchy in a closed community.

In a press release Friday, issued by the Secretary to Gombe State Government, Abubakar Njodi, revealed that the curfew was as a result of eruption of violence in Billiri town, which has degenerated to security threat to lives and property.

“The government affirmed the need for peaceful coexistence among the citizenry and commitment to the protection of lives and properties. Consequently, the Government has suspended all forms of gathering in Billiri Local Government area.

“All security agencies are hereby directed towards ensure strict compliance to this directive.

“All citizens are expected to comply with the directive except those personnel providing essential services,” he said .

Commissioner of Police Hammed Maikudi, while briefing journalists in his office, called on the community to embrace dialogue in registering their grievances rather than engaged in actions that infringed on the rights of others.

The CP urged the protesters to allow the Governor to perform his constitutional role in the appointment of the new Mai Tangale.

“As at today, the Governor has not made any pronouncement on this matter, we are appealing to the protesters to allow the governor to play his role in this matter.

“On our part, we have chosen to embrace dialogue but we also have the option to use force and we don’t want to do this,” he said.

The CP said the community should desist from making inflammatory statements that could lead to breach of peace in the area, adding that all hands must be on deck to maintain peace and order in the community.

The CAN LG chairman has cautioned the governor to do the needful in a timely manner with a view to cushioning the devil raised, anarchy degenerated tension.