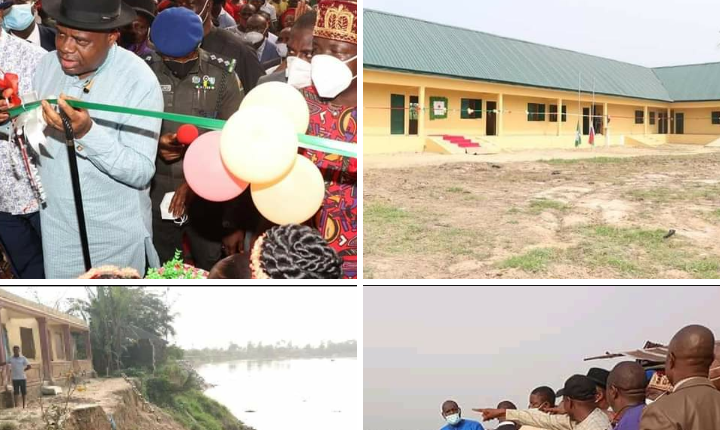 Bayelsa State Governor, Senator Douye Diri, has been lauded for directing immediate implementation of measures that would tackle the coastal erosion disaster at Obogoro-Atissa in Yenagoa, the state capital

The Lawmaker representing Yenagoa-Kolokuma/Opokuma Federal Constituency in Nigeria’s House of Representatives, Prof. Steve Azaiki, made the commendation sequel to the Governor’s recent pronouncement.

The governor, while commissioning a six-classroom block at St. John’s Primary School, Obogoro, had directed the state Ministry of Environment to immediately open up a natural canal in the community, dredge and sand-fill the land affected by the erosion in order to prevent water from the Ikoli Creek from further eating off the community’s land.

‘This gesture of the State Government led by Senator Diri, is an elating development, worthy of commendation”, Prof. Azaiki stated.

He further stated that, the gesture also portrays Senator Diri as a responsive governor who has the people at heart.

He added that as a representive of the area, he had also solicited the intervention of the State and Federal Governments in the plight of Obogoro in addition to that of Famgbe-Atissa.

According to him the Federal intervention, was expected to be funded through budget of the Federal Ministry of Environment, following his demand, but the Ministry couldn’t capture it in its 2021 proposals, instead it looked up to a subsequent budget.

According to him, he had also visited the Ecology Fund and the Federal Ministry of Environment, as well as wrote letters to these institutions and President Muhammadu Buhari, to budget for and execute shore protection projects as well as provide, interim reliefs to Obogoro Community.

“Governance and development are the responsibilities of both State and Federal Governments, hence any level can take up a certain responsibility for the interest of the people, or the two levels could collaborate to do so.

“Therefore, I join Senator Diri to reiterate my call on the Ecology Fund, Federal Ministry of Environment; Niger Delta Development Commission (NDDC) and multinational oil companies in the state to come to the aid of Bayelsa State Government in tackling coastal erosion at Obogoro and other communities, as Senator Diri has taken the lead to do so”, the Legislator re-appealed.

In a related development, Prof. Azaiki has commended the Bayelsa State Governor, Senator Douye Diri for directing the state Commissioner for Education, Mr. Gentle Emelah, to ensure that a six-classroom block was built to add to the six-classroom block just commissioned at Obogoro by the Governor.

Azaiki also expressed delight at the governor’s directive that the Education Ministry should post more teachers to the school, while the Commissioner for Works and Infrastructure, Surveyor Moses Teibowei should see to the construction of access road to the campus.

He gave kudos to Hon. Oforji Oboku, representive of Yelga 1 Constituency in the State House of Assembly, for the construction and commissioning of the six-classroom block for St. John’s Primary School, Obogoro.