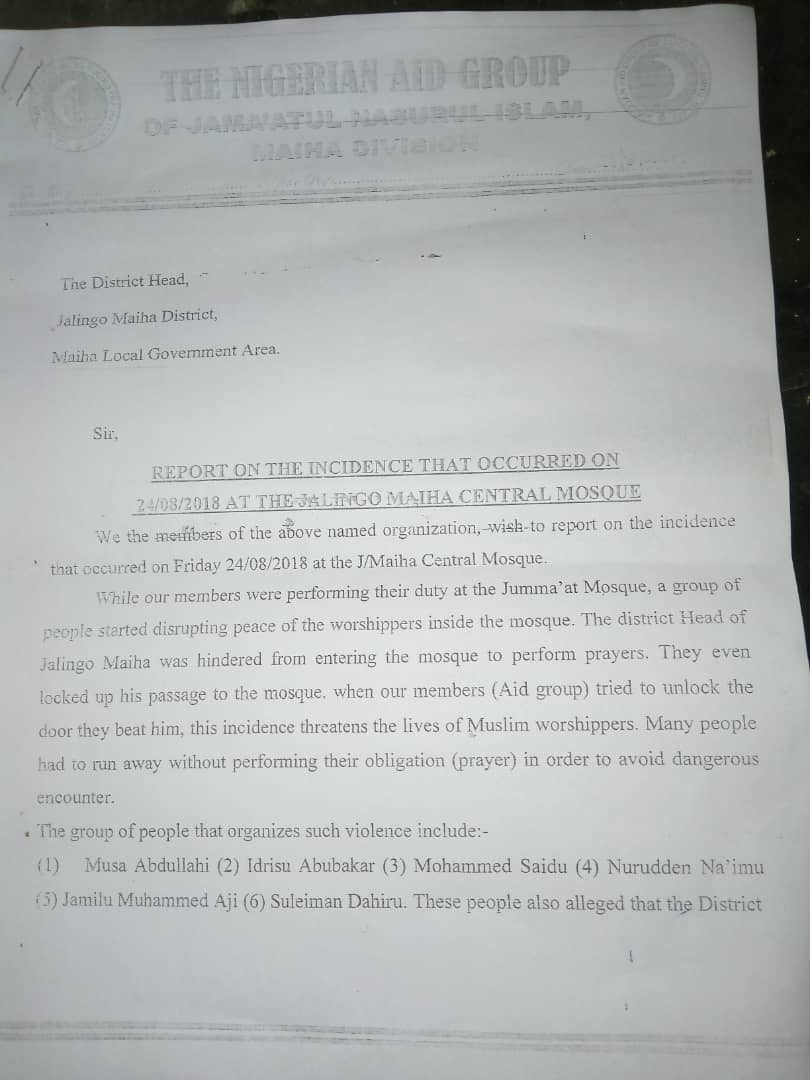 After the show of shame Friday, which sent the imposter home and eventually, banned by the worshippers from ever attending Friday prayers at the central mosque of Jalingo-Maiha district for engaging himself into a filthy romance with the contempt of court by parading himself as district head, the act for which Idi Wakili Usman as the fourth defendant, was being restrained by court order, he was said to have invited the leadership of the Muslim Council in Maiha to write a petition incriminating the victims of his conspiracy in attempting to expel the Imam of the central mosque, as villains.

Neither the mosque committee nor the Muslim Council has agreed to go by the bidding of the imposter.

However, when approached, due to shared sentiment, the leadership of the Aid Group of the Jama’atul Nasrul Islam, agreed to the bidding, to turn a prey to predator, in a petition letter addressed to the imposter as district head of Jalingo-Maiha district, signed by Idi Usman the Aid Group Commandant and copied to security chiefs.

The following is the unedited full text of the letter:

Sir, Report on the Incidence that Occurred on 24/8/2018 at Jalingo-Maiha Central Mosque We the members of the above named organisation wish to report the incidence that occurred on Friday 24/8/2018 at J/Maiha Central Mosque. While our members were performing their duty at the Jumuat Mosque, a group of people started disrupting peace of the worshippers inside the mosque. The district head of Jalingo-Maiha was hindered from entering the mosque to perform prayers. They even locked up his passage to the mosque. When our members (Aid Group) tried to unlock the door, they beat him. This incidence threatened the lives of Muslim worshippers, many people had to run away without performing their obligation (prayer) in other to avoid dangerous encounter.

The group of people that organises such violence include:

These people also alleged that the district head have changed the Imam of the mosque. This is a fabricated and a blatant lies that has no evidence.

We therefore, recommend that all the security agents should be informed and drastic measures must be taken to avoid any future occurrence of this ugly incidence. As this is just the beginning, they said.

Well, the six unarmed people accused were not enough to cause commotion at the Maiha central mosque. besides, Musa Abdullahi was a guardman at the palace of the district head. He was even injured by the antagonistic Mob. Idris Abubakar was a prince a heir to Ubandoma the late district head. Muhammad Said was the Adhan of the central mosque. How could these people be said to be those who instigated violence?

The petition however failed to mention the roles played by the miserably paid irresponsible armed youths who were deployed to do the bidding of Idi the imposter, among whom were Ishaq Abdulkarim and Mandi Photos who were found with the possession of dangerous weapons such as knives. Mandi, it was reported, even went ahead to break the glass windows of the mosque.

There was the mosque committee and the Muslim Council, why should Aid Group of JNI be the body to write petition letter?

The propaganda by the leadership of this Islamic organisation, in justification of the imposition of imposter as district head, is to say the least, shameful.

The imposter was said to have been served form 48 against contempt of court. The Periscope global Investigate would reveal that the DSS and the Commissioner of Police have jointly warned the imposter against parading himself as the district head of Jalingo-Maiha when he was invited to Yola on Monday.

JNI Adamawa state must call the leadership of the Aid Group of JNI Jalingo-Maiha to order. Religious organisation shouldn’t go irreligious due to greed and shared, away from faith, sentiment, supporting injustice. Peace! 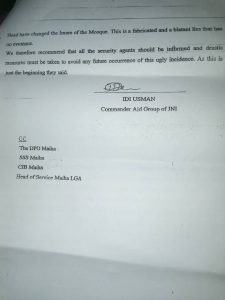 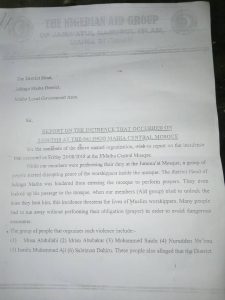