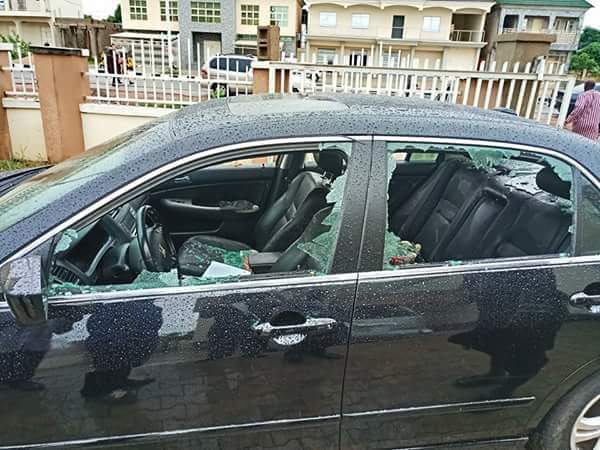 As intra power-play ahead of 2019 general polls continue to manifest, the Dimas Ezra led faction of the All Progressives Congress (APC), has accused Bindow’s loyalists behind attack on them Saturday morning leading to the destruction of three cars.

The spokesman of the group, Usman Ibrahim has in a phone chat told our correspondent that they were attacked while holding a meeting to articulate their position on the need for the national headquarters of the party to accede to the demand of conducting direct primaries in the state chapter of the party.

“We were holding a meeting to fine tune our stand on the need for the national secretariat to hold direct congress when we heard youth chanting sai Bindow”.

“At first we thought they were anti Ahmadu Umaru Fintiri elements who was declaring his intention to contest the gubernatorial election under PDP, but to our surprise, we heard pandemonium outside the office we were holding our meeting as the youth tried to force their way into the office.

” Luckily, sensing danger, the gateman locked the gate preventing the hoodlums from gaining access into the compound. Since they could not enter the premises, they decided to destroy our cars,” he said.

He added that the reason for their suspicion of Bindow and the Yola north lawmaker was due to the presence of their loyalists as the attack lasted.

“In fact, one of the lawmaker’s close aides brought the hoodlums to our office to prosecute the attack on us, therefore, we are very sure the governor and Sulaiman Alkali were behind the attack,” he said.

Ibrahim added that the governor’s hardline posture behind the conduct of the direct primaries which will be inimical to his return bid in 2019 was the major reason for the hostility as the governor knows that he does not enjoy the confidence and support of Adamawa people following his woeful performance.

He noted that they have reported the attack to the Karewa divisional police station.

When contacted, via phone chat, the member representing Yola north in the state house of assembly, Hon Sulaiman Umar Alkali, exonerated himself of complicity behind the attack noting that the accusation was a figment of the imagination of his accusers.

Efforts to contact the force public relations officer, Adamawa state police command, Abubakar Othman proved futile as his line was said to be switched off and an SMS forwarded to his line could not be responded to as at the time of going to press.