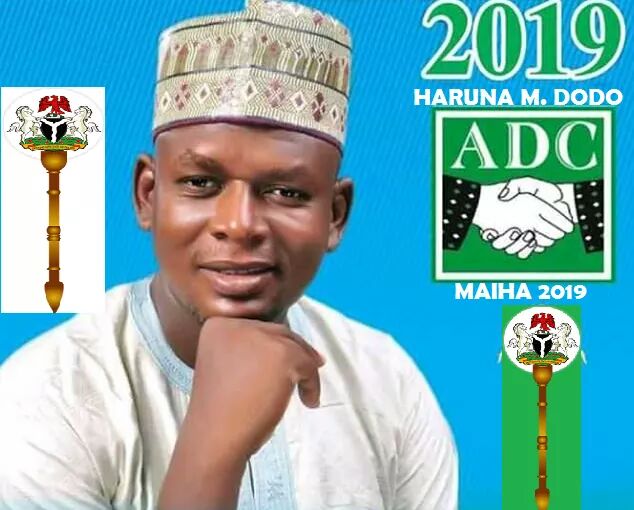 The recent news reports about Maiha local government area of Adamawa state, were on the legitimacy of the monarchy in Jalingo-Maiha District: how the stool was robbed and how it was restored to the legitimate heir: how the imposter claimed to have the backing of the state governor engaged in romance with the contempt of court attempted to instigate violence for anarchy: how the imposter was subdued by the relevant security operatives and eventually, how the judiciary would interpret the silent action of the governor against the court order to approve the appointment of the legitimate heir.

Maiha was said to be in search of peace, legitimate leadership and adequate representation against injustice with impunity.

Now is about political permutations in Maiha, where two candidates have indicated interest of being elected into the state house of assembly, could go for ADC primaries.

Alh. Tijjani Maksha the party’s marksman in Maiha who initially told the electorates that he would not contest and Alh. Haruna Muhammad Dodo who nurtured the support of the teeming youths that would not tolerate hypocrisy.

ADC was commended for adhering to the “not too young to rule philosophy in Adamawa state. Little wonder the encouragement of the capable young men with intellect and strength to be at the vanguard, serving as the voice of the exploited, oppressed and misrepresented voiceless.

Typical of the proverbial payback time, the youths, among the teeming electorates in Maiha local government area of Adamawa state, invited Alh. Haruna Muhammad Dodo to represent the LGA as a legislature with the state house of assembly.

The not too young to rule Dodo, was a cashier with the Maiha local government authority before transferring his service as a lecturer with the Adamawa state polytechnic having been equipped with postgraduate knowledge and character.

Haruna Dodo, the youths in Maiha have revealed, sponsored so many indigent indigenes of Maiha for secondary education and diploma programmes.

The impact of Dodo family, commended for humanitarian services, was said to be additional advantage to the young Dodo.

Haruna Dodo, having collected the expression of interest and the nomination form, told the newsmen that the misrepresentation was what irked the electorates to lure him to the daunting task.

Young Dodo said that his connections, both within and outside the country in addition to his experiences in public service, which was not by accident, would be of great benefit.

“Maiha is like left abandoned. The electorates are asking whether they have representatives at all and where they are, should there be any.

“This is the riddle that the electorates want me to work on and Insha Allah, if given the opportunity, Maiha will not be disappointed,” the not too young to rule Dodo said.

It would appear that the issue of SAK would not be accommodated in the community having a unified votes because the byproducts of SAK have humiliated the party that brought them and would still want to ride on the party to win.

“Maiha LGA devastated by misrepresentation, destroying the bridge leading to peaceful coexistence; a metaphorical neglect of bridge linking towns, villages and districts with other LGAs

It was not easy, especially during rainy season, for newsmen on investigative mission to Maiha local government area of Adamawa state, Nigeria.

The roads were summarily tough and rough. The area seemed to be left abandoned. The voiceless were disappointed by the would be representational voices.

It was time for declaration soliciting for yet another ruinous tenure, another neglect, another damnation, or so the sage would be pleased to be heard explaining when he would be insisting to be allowed to ask the individual roles of the would be seekers of mandate for 2019 election in resolving conflict surrounding the monarchy in Maiha.

Some youth group guided by a seeming radical ringleader would round up a somewhat dramatic show of shame; demeaning fame, lamenting that it was either a lawmaker who could not even in chorus, join in chanting “nay” or “I” for either of the opinions to be pronounced as “having it”, either based on “majority have it” or at the discretion of he who finalised the decision on passing, to have thought of initiating a bill favourable to his constituency, such as road rehabilitation even the like in Mubi, a functional hospital with adequate manpower and machine and qualitqualitative education in addition to other skills acquisition and empowerment programmes.

Or the representatives who knew abroad, Abuja and only Yola better than where they were mandated to represent. Those who would rather pretentiously, think back by calling back home when they would want to launch a come back; another mandate, kitted in the gown of lies, deceit and incapability they were to admit as not in anyway amounting to weak and wickedness.

Or those around the accounting officer of the state, having a portfolio but lacking the initiatives, the skills and spirit of and in uplifting their constituency over and above self.

“When and where you see the retrogressive elements unite for a common goal, is when the overambitious want to have their constituency degenerate into anarchy occasioned by somewhat superimposed dissension aimed at divide and rule, typical of the crisis associated with the monarchy in Maiha, when they ought to have concentrated in cementing relationship, building bridges for mutual coexistence and harmonious relationship as much as when they ought to have taken seriously, the measures in addressing the issue of collapse bridge, the tough and rough roads” The seeming radical ringleader would remark.

Maiha bridge; the bridge linking Mayo Nguli to Mbilla, Belel and Sorau districts of Maiha LGA and Jabbi-Lamba in Girei LGA is almost about to collapse. The voiceless are looking for a voice that could be heard when this issue is presented.

“Is the Adamawa state governor not from Maiha local government area? You only need to call to his attention, when those who ought to have, who could but couldn’t.” A newsman turned analyst would advance an advice.
excerpt from Ambassador Dodo.

Hajiya Hapsatu Dahiru would corroborate that “there are three bridges in this condition, Lokuwa in Mubi, Buladega and this one in Mayo Nguli and if not mistaken the bridges were build by the same company. Adamawa has become Over Seas territory of Nigeria due to bad roads as if there are no representatives from here.”