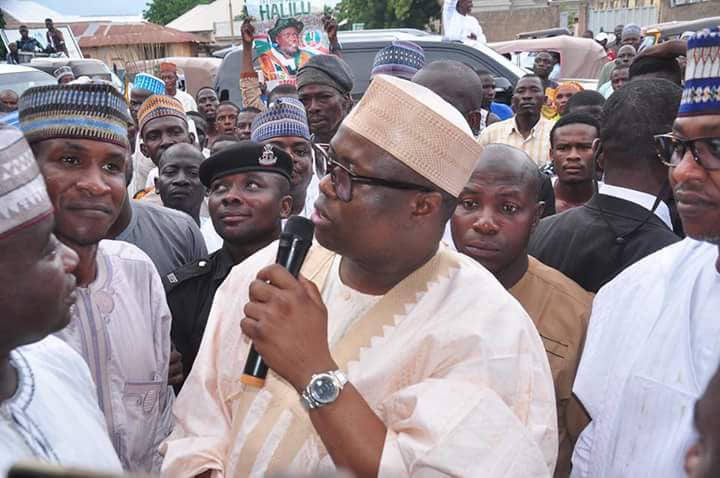 Little governor Bindow of Adamawa state did know that his second term bid would be a tough challenge when he was sworn in, having won the gubernatorial election in 2015.

Bindow was said to have invited nominations from the defeated parties for political appointments in addition to joining his cabinet as commissioners, kind of extending hand of friendship, acting as one-big-family, rather than remaining in the opposition with jaundiced principles.

The going was said to be smooth at the initial state, before the clueless kind of definition could get to spell on the rough decision to maintain the old order against change in going through administratively, famished road to arrive at, to have been a desired destination, owing to the alleged awarding of contracts to favoured company at exorbitant quotations without following due process against procurement mandate; the concentration, on roads rehabilitation in some local government areas of the state at the expense of other sectors; such as education, healthcare and social welfare among other human capacity developments and empowerment drive; with the skills acquisition centres; a initiative of Nyako led government being betrayed to waste, hibernating the ideals associated with pragmatic rather functional kind of knowledge acquisition.

The refusal of the Bindow led government to keep to its promise of settling unpaid salaries and other arrears of entitlements in spite of the bailouts and Paris Club refund funds, part of which was said to have found a hidden entry into the purse of the prayer warriors with a view to exorcising the devil in Boko Haram insurgency; the claim which the clergies challenged as balderdash, seeking for evidence and that which the government eventually retracted.

The question of the alleged politics-instigating disharmony and mutual mistrust between and among the electorates deploying the service tribal sentiment aimed at divide and rule.

There was among the double standard allegations, the articulated Atiku factor and PDP favouritism in addition fractioning of the party into factions for friction, the permeated action, which permitted a consideration of a literary interpretation to crudely mean the fictionalisation of the change philosophy as advocated by APC; a kind of “InterInvention”, moralising Wole Soyinka.

Based on these, among other issues, the eligible to be voted for, decided a redefinition of change in tune with the party’s manifesto.

The Senator Abdulaziz Nyako factor and the defection of Malam Nuhu Ribadu the anticorruption tsar and Engr Marcus Gundiri, to APC were jointly said to be the beginning of the suffocating discomfort to the Bindow faction, especially when the latter could not make the party inhospitable to the defectors who seemed to have joined alliance with the Nyako as the “Black Cap” kind of pressure group’s activities could get to suggest.

However, the Bindow supporters argued that the defectors were by no means any threat, in the sense that the duo have contested and were given a humiliating defeat during the 2015 gubernatorial election and that Sen. Nyako, having defected from APC, due to alleged irregularities during the delegate election, which could be described as impunity championed by the chief executive of the state aimed at disenfranchising other contestants, could only get to be considered after the party primary elections.

If the defectors were truly immaterial, a political analyst would ask, why was there any need to deploy the services of the miserably paid thugs to vandalise the vehicles of the Ribadu led APC faction while they were having meetin aimed at strengthening the direct primaries and why should the governor insist on indirect primaries, wasn’t he confident of himself?

Engr Marcus Gundiri was yet to either declare intention or purchase the nomination form. However, Mal. Nuhu Ribadu was the first gubernatorial candidate to purchase the APC nomination and expression of interest forms.

“Adamawa state is tainted by economic, financial and administrative injustices. The study recommended for a holistic system review with a view to getting the state out of the maze. The under development caused by inefficiency and greed, is summarily shameful. When the government of a somewhat salary state failed to pay it’s public servants their salaries, how do you define it’s economy?

“When a state is bereft of education, healthcare and other social welfare, can you estimate how backward it could get to be reduced?” One of the Black Cap revolutionaries would lament while canvassing for Ribadu mandate for desired change.

Dr. Mahmood Halilu Ahmed, popularly known as Modi, was the second gubernatorial candidate to purchase the APC nomination and expression of interest forms.

Modi a brother-in-law to President Muhammadu Buhari, was initially said to have indicated interest to represent the central senatorial zone of Adamawa state.
Modi was however said not to be given a greenlight by the governor who, either him or a strong member of his cabinet, had a candidate to support to the senate.

The electorates, having the impression that for President Muhammadu Buhari to have confidence in someone he has been with for many years, the person must be of proven integrity enough for the leadership responsibility and that since there were capable candidates for the Senate, there was the need to restore public confidence in governance in Adamawa state. Modi was then pencilled by the electorates for the herculean task.

Dahiru Hammandikko the founder of Buhari/Osinbajo and Bindow 2019, dismissed Modi with a modified coded with a wave of hand as lightweight, for lacking the support base to make any impact at the polls.

Hammadikko’s claim, which was eventually debunked, might not be unconnected with the impression that the Bindow faction, advocating for indirect primary elections, have already decided the delegates for the deal. Therefore, the entire delegates would simply pick Bindow.

The Newshawk articulated that Modi’s entry into the race, which became topical, seemed to have rattled the governor’s camp. Bindow’s supporters became jittery speculating that the governor might not enjoy fair treatment because of the blood affinity between Aisha Muhammadu Buhari and Modi.

The snapshot Modi holding his nomination form and PMB has really worked on the Bindow faction.

At a formal declaration of his gubernatorial ambition in Yola before an intimidating electorates as supporters on Monday, Modi accused Governor Muhammadu Umaru Jibrilla Bindow of dishonesty and neglect of all sectors.

Modi attributed the sufferings to which the people of Adamawa were subjected, to leadership ineffectiveness and inefficiency lurking in public lies typical of what Wole Soyinka’s “InterInvention” has narrated.

“Lying is an act of hypocrisy along with breaking promises and betrayal of trust. A community is doomed when it has a pathological liar as leader,” a Modibbo among Modi’s supporters would emphasis.

Modi promised to work with the party (APC) executives and other stakeholders if nominated and eventually won the general election.

Governor Muhammadu Ummaru Jibrilla Bindow was the third gubernatorial candidate to purchase the APC nomination and expression of interest forms, in a daring move suggesting that though it was raining heavily politically, he has poetically not developed cold feather to have technically exposed the pessimist in him.

Bindow was said to be convinced by statistics, which revealed that his achievements weighed more than his failures and that his supporters were unmatchable in number for him jitter.

Besides, the state executive council members were entirely by his side and have supported the indirect primaries and that he has the majority of the delegates to vote for him.

Ibrahim Bilal, the APC state party chairman assured all aspirants of justice and fair play at the primaries.
Peace!