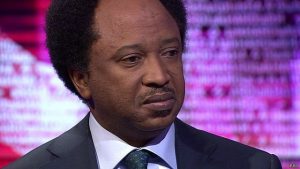 The All Progressives Congress, APC, has reacted to the resignation of one of its senators, Shehu Sani, from the party.

Senator Sani had announced his resignation in a letter addressed to his ward chairman in Kaduna state on Saturday over prolonged crisis in the state chapter of the ruling party.

According to his letter, “I present to you my highest compliments and wish by this communication to formally offer you my resignation from the APC.

“I had joined the APC and remained with it against all odds in the belief that it will constitute a veritable platform for the realisation of those democratic ideals which I hold very dear.

“I joined in the belief that honour and integrity will be the ultimate ethos of the party and most importantly, that internal democracy will always be the norm,” Shehu Sani said in part.

Speaking on the development, APC in a terse statement, signed by its National Publicity Secretary, Mallam Lanre Issa-Onilu said, it was studying and relating all the facts before taking an appropriate action.

The statement read: “We received the news of the alleged defection of Senator Shehu Sani through media reports.

“The party leadership will relate with all the facts concerning the reported defection and react appropriately in due course.”

Meanwhile, a coalition of Buhari/Osinbajo support groups, has called on the National Chairman of the All Progressives Congress (APC) to urgently flush out the senator representing Kaduna Central, Senator Shehu Sani from the party over what they termed his sins against President Muhammadu Buhari and the ruling party.

Convener of the coalition, Abdulrauf Abdullahi, while briefing newsmen in Kaduna on Saturday, said, “We therefore join other patriotic Nigerians in calling on the National leadership of the APC led by the hardworking Comrade Adams Oshiomhole, to invoke the relevant party guidelines by flushing out the likes of the loquacious Senator.

“The APC as a symbol of positive change should set modesty aside and tackle the thorny moles deeply entrenched at various levels of the party and doing more harm than good.”

The support groups continued, “As a coalition of promoters and defenders of democracy, we deem it very important to declare our stand and expose the political brigandage of incumbent Kaduna Central Senator, Shehu Sani for the records.

“As compatriots, we feel deeply concerned about the serial media attacks against President Buhari and the APC by the Senator, after scaling to victory on the massive goodwill of the President and his party.

“It is because of the need to set the records straight and expose the questionable, downright suspicious, betrayal and barefaced hypocrisy that we embarked on the compilation of this Compendium. It is a joint effort whereby each of the stakeholders in this coalition took divergent angles of the multiple news media coverage of the regrettable compromise by the incumbent Senator.

“We are glad to inform the whole world that we have set aside today for presenting our humble research work for the records and to further enlighten the public on the kind of moles and untrustworthy people in the APC deliberately working in opposite direction.

“We make bold to say that this indecorous media attack on our President and the APC smacks of back-stabbing and ingratitude.”

“As the team of authors of this joint compendium, we hereby launch it for public consumption and as a guide on the antics of the incumbent Senator whose rampage has dared to outclass even the opposition elements.

“It is now abundantly clear, that the incumbent Senator’s gangster approach have thus exposed the bitter edges of his familiar antics of engaging in acts meant to either embarrass the Presidency or the APC as a party.

“This compendium is therefore a clear evidence of the Senator and his paymasters’ carefully-planned sinister scheme of rubbishing President Buhari’s anti-corruption war and denigration of the APC revolutionary change mantra. We are appalled that these antagonistic paymasters have so readily moulded a supposedly representative of Kaduna Central into a cannon powder used for the attainment of their selfish political agenda.

“Our simple, joint research findings, which we are launching today as Compendium has proved beyond reasonable doubt, that Senator Shehu is ahead of all Nigerian politicians, including incurable haters of the APC and Buhari Presidency, in terms of serial media attacks on the entire administration and its policies.

“We have limited our findings to just the years between 2015 and 2018, the moment he granted most of his usual dirty interviews and mean social media posts, designed to disparage either President Buhari or the APC.

“We wish to also formally inform the whole world, that our plan to hold similar launching of Compendium on other anti-Buhari and anti-APC elements are now in top gear. This means we will continue to launch more compendia on the remaining moles planted in the APC.

“As 2019 general elections is fast approaching we intend to expose all the bad eggs between now and December to safeguard the interests of Mr. President and the APC, ahead of the elections.

“Our ultimate goal is to ensure that bad eggs within the APC are shown the way out before the whistle for 2019 polls is finally blown.

“Watch out more new compendium from now till December.This is our pledge,” they submitted.