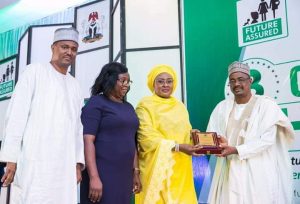 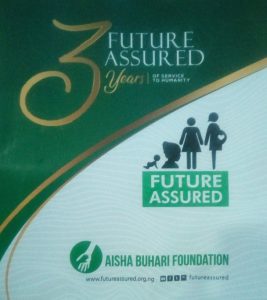 Future Assured is a nongovernmental, not-for-profit organisation founded by the wife of the president Dr. Aisha Muhammadu Buhari to address the challenges facing women, youths and children in Nigeria. 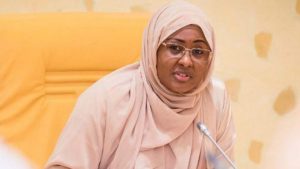 Future Assured skewed most of its activities and efforts towards advocacy and service delivery focusing on health, education and economic empowerment as its three broad areas. 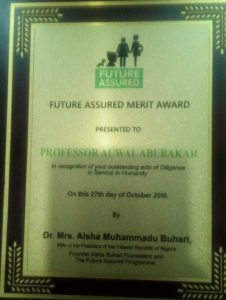 Prof. Auwal Muhammad Abubakar was awarded for leading a team of 26 medical professionals and surgeons that have successfully separated conjoined twins by name Fatimah and Maryam in FMC Yola on May 24, 2018. Augustine Frederick was recognised by the Future Assured Foundation for using his personal resources to render free services in training other teachers and facilitated deworming for children in Jada LGA of Adamawa state without any prompting.

DCP Abba Kyari an assistant police commissioner of Lagos State was awarded for his effort in bringing high-profile hoodlums and criminals to justice. He was instrumental to the arrest of the country’s most notorious and wanted kidnappers in Lagos, among other achievements.

Other achievers included Rouna Meyer a multimedia journalist for her campaign against codeine, Prince Paul Ikonne for campaign against drug abuse among youths, Tobore Mit Ovuorie the human right activist investigative journalist with Premium Times whose report on human trafficking was outstanding, Sharon Okoe the 17 year old girl who designed an app to connect local fishermen to buyers in Makoki area of Lagos State, Abisoye Abosede Ajayi for educationally empowering young girls on entrepreneurship, FlexiSAF Foundation for promoting child education, Fahad Garba Aliyu for leading a project to pilot youth empowerment livelihood program (YELP) scheme in Bwari where Internally Displaced Persons IDPs were empowered with skills, Tochukwu Egesi for a social innovation centre that uses both offline and online technology to support project field workers for data collection, proper monitoring and evaluation and Angela Anthony for supporting and empowering indigent people and windows by using the proceeds from her initiative to provide food, transit homes, clothing and training.

In his remark, Prof. Auwal commended the initiative of the Future Assured Foundation, called for peace, unity and mutual cooperation with the spirit of teamwork to be able to achieve success and for progress and development.

Augustine Frederick, while expressing his gratitude, told the Periscope Global Publishers that little he did know that his little effort would lead him to Ask Rock Villa to receive award before international community.

“It’s really so encouraging. I am grateful to Dr. Aisha Muhammadu Buhari for the free flight, the accommodation and the award,” Augustine said.