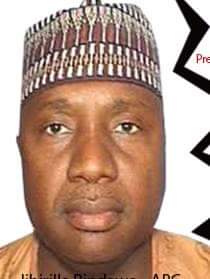 Governor Mohammed Umaru Jibrilla Bindow of Adamawa state has observed that, his current challenges with his political opponents would boost his political popularity to win the 2019 governorship election.

“The challenges I’m presently facing forms party of politics, any good politician should be prepared for such challenges more so as the general elections is around the corner.

“Governing Adamawa state is very very challenging owing to the complex nature of the state and the people.

“That is why I”m having these challenges, but God’s willing, I will come out of the problems.

“The people of Adamawa state are behind me because I am doing the best job expected of me to them. So with God and the people, I will surmount all these problems.

“It is only Almighty God that gave me the mandate that can take it from me and am not detracted from giving the people what they want by the evil machination of political opponent,” Jibrilla stressed.

Governor Mohammed Jibrilla advised his political opponents to criticize the policies of the administration and not personalities in the government as criticism is part of political process.

Bindow has however declined to make any comment on the contentious certificate forgery scandal.

The newly sworn-in commissioner Alhaji Halilu gave assurance that he would bring his experience in the banking sector to contribute to checks and balances in the administration.