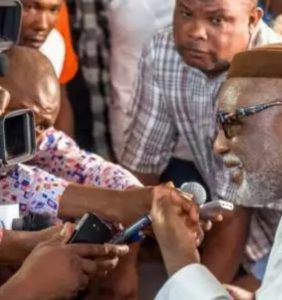 Embittered by unfavourable press coverage, Rotimi Akeredolu, Governor of Ondo State, has barred some media stations from covering his activities and that of the state government, Sahara Reporters has learnt.

The media outlets include the Channels Television, the African Independent Television (AIT), Raypower and Core Television.

They have been instructed to drop all the state government property in their possession, which include the state house media identity cards printed for them by state government through the office of the Chief Press Secretary to the Governor.

It was reliably gathered that these blacklisted media stations have been stopped from accessing the facilities of the Alagbaka ‘Press Crew’ office of the Governor in Akure.

Government office sources told Sahara Reporters on Monday that reporters and cameramen with the affected media stations were given “quit notice” to vacate the office of the Governor with immediate effect.

One of the sources, who pleaded not to be named as he was not authorized to speak on the matter, said the journalists were asked to “pack their load” and leave the government office because their services were no longer needed.

He revealed that the journalists with the affected media stations were accused of reporting the activities of the government in “bad light” while ignoring the development stories that could attract investors to the state.

“The main issue that the government has with these affected media stations is their critical reportage on government activities in the state,” he said.

“And I am aware that they have once been warned, sanction and threatened with expulsion by the Commissioner of Information, Yemi Olowolabi, but it seems the media managers of these stations have an axe to grid with the state government and the Governor Akeredolu himself.”

“Yes, I know they have been expunged from the list of media stations being housed in the Government Office and I am aware the decision is final unless the government renegotiates with their managers if they are ready to listen,” he said.

“The issue is that the amount the state government spends on paying the media organizations on quarterly basis, particularly Channels Television, is enough for us to equip and upgrade our own media stations here in Ondo state.

“In fact, despite such payments, which I know the past government did before leaving office, these media stations don’t still report us well and in good light. We feel we can’t continue to retain them and we have told them we no longer need their services in the government house.”

A journalist with one of the affected media organizations confirmed their expulsion from the government office to Sahara Reporters via the phone.

“It is true. They told us to leave the government office on the pretence that they could no longer accommodate us and retain the quarterly payment,” said the journalist.

“We have passed the message to our office in Lagos and we are awaiting further directives for possible redeployment. Some of us are not surprised because since the inception of this APC-led government of Akeredolu, they have declared war on journalists.

“I am sure you have witnessed two attacks on us by thugs of the NURTW for doing our job and these people were sent by the machineries of the state government. So they knock the ones that do not carry out their biddings or refuse to praise-sing them in their stories.”

Mr. Oluyemi Olowolabi, the Ondo State Information Media Manager, did not respond to calls when contacted, and he refused to reply our correspondent’s text to his mobile phone.

Since Akeredolu’s emergence as Governor, his government has been battling with “bad press” as a result of his disposition to journalists and media professionals in the state and beyond.

In early 2017, he was quoted at a public event inside the International Event Centre, DOME, in Akure, as telling journalists: “I don’t care about whatever you guys write about me but let me tell you, I have become this governor and nothing or nobody will change me. So, you can continue to write whatever you like.”

Sahara Reporters had noticed that the coverage of the activities of the state government, since the beginning of year 2018, had been restricted to only select media stations, mostly the state-owned media outlets.

Our correspondent has repeatedly observed that the coverage of major news events involving the state government were taken over by Akeredolu’s media handlers.

These media handlers, with a background touch of censorship and vetting, produce only pro-state government stories on their social media pages before emailing them to journalists.