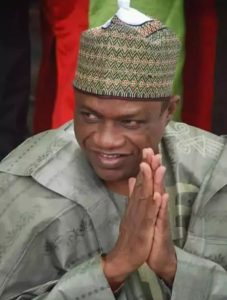 The rapidly expanding healthcare sector in Yobe state has got a major boost Monday, as the state government took delivery of billions of naira worth of medical equipment and supplies from the medical charity, World Medical Relief (WMR) and the Government of the United Kingdom.

Speaking after inspecting the equipment in Damaturu, Governor Ibrahim Gaidam explained that the donation was consequent upon his visit to their organisation’s headquarters in Detroit, Michigan sometimes in October last year where he met with its president, George V. Samson.

“I made a presentation to the WMR. I talked about the challenges we faced as a result of the devastations by Boko Haram insurgents. Mr. Samson promised us 10 40-feet containers of medical equipment and supplies, each valued at between USD400, 000 and USD500, 000, which will be used across the hospitals and medical centres in our state.

“The equipment that we are inspecting now are from five 40-feet containers. The health commissioner has confirmed to me that three more are in the high seas on their way to the country while we are awaiting the remaining two container,” the governor said.

Gaidam said that N105 million was spent by the government to transport the equipment to the state from Detroit in the United States.

Gaidam expressed appreciation to the WMR for their support and directed the ministry of health to immediately commence the distribution of the equipment to hospitals across the state.

Mr. Kaka Gana Mustapha, who spoke on behalf of the MNCH-2 State Team Leader Zanna Omar Ali, said the MNCH-2 was designed to strengthen primary healthcare interventions in the state and in five other states across the country.

Kaka said that since its inception in 2014, the programme has renovated primary healthcare facilities across the state, procured drugs, medical supplies and equipment and improved health governance in the state through capacity building on planning and budgeting.