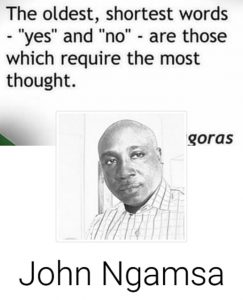 Adamawa House of Assembly on Tuesday confirmed the nomination of Dr John Ngamsa, a lecturer with Modibbo Adamawa University of Technology (MAUTECH), Yola, as commissioner nominee.

Could it be the next political game Ngamsa would play having lost the APC primary election owing to what he described as Nigerian factor?

Ngamsa shared the following quoted from his Facebook Wall: “ABOUT TO DISCLOSE MY NEXT POLITICAL STEP… as Uncle Tim
rightly wrote me…

“…we give and take blows. Some of the punches that come, we roll with them to mitigate the impact. ”

The house in plenary presided by the Speaker Kabiru Mijinyawa, also approved Bindow’s request to source for N220 million from Zenith Bank Plc.

The money was meant to finance the state counterpart contribution for the implementation of EU-UNICEF-supported rural water and sanitation programme in the state.

The bill was sponsored by Rufai Umar of Gombi Constituency.