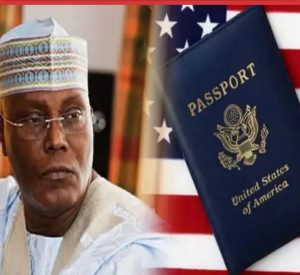 Contrary to reports that the United States has granted visa to the presidential candidate of the Peoples Democratic Party (PDP), Atiku Abubakar, after 13 years ban, INDEPENDENT authoritatively reports that he was never given visa.
An embassy source told INDEPENDENT that U.S. position on Atiku has not changed.

A family source confirmed to INDEPENDENT that Atiku only traveled to the UK and is also back in the country.

The family source said Atiku did not even apply for visa from the U.S. embassy as reported in the week.

The Federal Government fearing that the U.S. wanted to grant Atiku visa had cautioned that it would mean endorsing him for the 2019 election.

The Minister of Information and Culture, Alhaji Lai Mohammed, gave the government position at an interactive session with media executives in Abuja on Thursday.

Mohammed had said that the government was aware of the move by the former Vice President to lobby the U.S. to lift the visa ban imposed on him.

He said, while the U.S. has the prerogative of whom to issue visa, it should be mindful of the timing, in order not to give the impression that Atiku has been endorsed by the U.S. government.

“We understand and appreciate the fact that it is the prerogative of the U.S. to grant a visa to anyone who applies