The management of the Lagos State University (LASU) has reacted to the news about the certificate of one of its graduates found at barbecue stall (suya spot) in Epe area of the state.

LASU in a statement shared online by it’s Public Relations Officer, Ademola Adekoya, said it had recovered the certificate in question and thereafter found out that it had been invalidated due to an error in the spelling of owner’s surname.

It says the owner of the certificate had been reissued an authentic one since 2014. 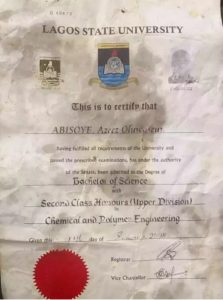 The university however accepted responsibility for mishandling the invalidated copy and said it had taken necessary steps to forestall a recurrence.

The attention of the Lagos State University Management is drawn to posts on some social media platforms of a LASU Degree Certificate allegedly found at a ‘SUYA SPOT.’

The University having recovered the ‘certificate’ on Wednesday, 21st November 2018, wishes to make the following clarifications:

The ‘certificate’ in question actually exists but was invalidated on 25th February 2013 because the graduate’s surname was wrongly written on the ‘certificate’ as ABISOYE instead of ABIOYE.

The University had issued another certificate carrying the correct surname and this was collected by the graduate on the 30th of September, 2014.

Mrs. Adeyemi ADESANYA, a seller of soft drinks at a location near the Epe campus, who recovered the invalidated certificate near her shop, posted the image on a social media platform, supposedly for the attention of the ‘owner’.

Although the social media post by Mrs. Adeyemi ADESANYA was a source of embarrassment to the University, however, the University Management wishes to assure all stakeholders and the general public of its determination to sustainably preserve the sanctity and integrity of all validly issued certificates by the University. 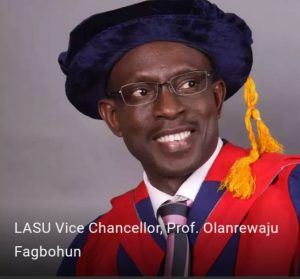 Towards this end, the University Management has taken immediate actions to forestall such unpleasant incident.

The University Management profoundly appreciates all members of staff, University Community and other stakeholders for the interest and concern shown in this regard.