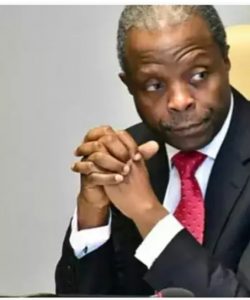 Yemi Osinbajo says the problem with Nigeria is not about resources or planning, but the poor management of resources in the past.

This was contained in a statement by Laolu Akande, Senior Special Assistant to the President, Media and Publicity, Office of the Vice President, on Monday in Abuja.

Fielding questions from a cross-section of Nigerians in Germany on Sunday night, Mr Osinbajo said that those who made away with the nation’s resources should be made to account for it.

He said that to move forward, such massive corruption should not be allowed again.

“The greatest problem Nigeria has is one of grand corruption; that is the biggest problem we have; not the problem of planning or plans; and grand corruption is the reason why we are not moving as fast as we should in our country.

The vice president said that most of the issues raised by the Nigerians in Diaspora at the meeting over lack of energy, infrastructure, quality and extensive healthcare services, education and security were traceable to the management of resources.

He called on Nigerians to hold leaders accountable for the nation’s wealth.

The vice president responded to over 30 questions at the town hall meeting in Berlin, described by many of the attendees as the first of its kind since 1999, when civil rule was restored in Nigeria.

Mr Osinbajo stated that one of the key issues the President Muhammadu Buhari’s administration was dealing with in partnership with European leaders was the repatriation of the country’s stolen assets stashed abroad.

He said that the federal government was equally having conversations with European countries on the subject of migration of Nigerians to Europe.

The vice president told the gathering that government was concerned about migration issue and had started negotiating with European countries.

He added that European countries could partner with Nigeria by investing in the country thereby discouraging the prevalent migration of young people.

Mr Osinbajo expressed optimism that the challenge could be effectively addressed through Nigeria’s collaboration with its European partners.

Explaining the federal government’s efforts at addressing unemployment challenges, the vice president observed that a young population of about 60 percent created a yearly addition of about 1.4 million graduates to the unemployment market.

He, however, revealed that the Buhari-led administration was addressing the matter as the federal government had employed 500,000 graduates under the N-Power scheme, as well as through other social investment programmes like MarketMoni and TraderMoni.

On healthcare delivery to the majority of Nigerians, Mr Osinbajo agreed on the need to extend good healthcare to all Nigerians but pointed out that it could only be achieved through a compulsory health insurance policy.

Underscoring the urgent need to develop a functional educational system, the vice president announced that the Buhari-led administration was developing a robust education policy, saying “education is the basis of all we’re doing.”

On the ongoing strike by members of the Academic Staff Union of Universities (ASUU), the vice president said negotiation between the federal government and ASUU was continuing and expressed hope that an agreement could be reached soon.

The Ambassadors of Nigeria to Germany, France, Italy, Switzerland and Belgium were all part of the audience.

The vice president will headline the Nigerian-German Business Dialogue in Berlin on Monday. (NAN)