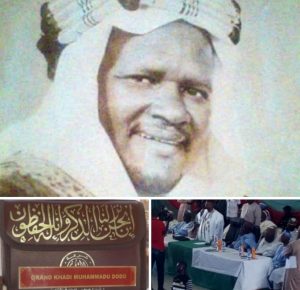 Islamic Development Centre IDC Yola a Faith Based Nongovernmental Organisation in Adamawa state was established 20 years ago with the sole objectives of promoting true Islamic ideals and advocating peaceful coexistence.

Dr. Ali Pantami the Director General National Information Technology Development Agency NITDA who was though unavoidably absent and Sheikh Muhammad Bn Uthman the Imam Kundila Mosque Kano were among the Scholars of international recognition invited to grace the occasion by delivering lectures on Information Technology and the use to which it could be put based on Islamic perspective against hate speeches and other immoralities shared via social media equally defining unethical journalism

Governor Bindow of Adamawa one of the award recipients graced the occasion but could not stay beyond opening ceremony for other engagements.

Bindow, lamented over the misuse and social media abuse that would be tantamount to disintegrating rather than uniting the entity.

The Emir of Mubi and the Gangwari Ganye have both sent delegation of representatives for their awards.

Justice Lamin Muhammad Dodo the grand patron of the IDC, was duly represented by children for a posthumous worthy grand patron recognition

Now after 20 years What are the recorded achievements?

How many candidates benefitted from the Islamic Proficiency Course?