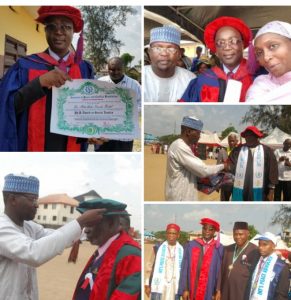 The Institute of Peace Advocacy of the United Nations-POLAC has conferred Honorary Doctorate Degrees PhDs in Peace Advocacy, on its three most outstanding Ambassadors in its maiden 2018 convocation ceremony held Saturday in Uyo, Akwa Ibom state. 21 members were also inducted as Peace Ambassadors, the Newshawk will reveal.

“Incidentally, the three Ambassadors who are being conferred with Honorary Doctorate Degrees today, are from the same local government area; Maiha in Adamawa State Nigeria: Dr. Belel and the two Dodos.

“The contributions of Dr. Abdullahi Dauda Belel in primary healthcare, peace building and community development initiatives in Adamawa state cannot be over emphasised.

“Dr. Ibrahim Muhammad Dodo has made tremendous impact on peace advocacy among other community service development initiatives in Bauchi state.

“The Multiple Fellow, the 2018 Best states Director with the UN-POLAC Dr. Adamu Muhammad Dodo, has really made my day. The creative minded with media skills and connections, has a vocation in challenging injustice in defence of the downtrodden, which is traceable from the family root, we’re told.

“Among the 21 inducted UN-POLAC Ambassadors of Peace, one is from Adamawa state. AmbP Mohammed Gidado Mohammed the Sarkin Dawakin Jimeta, a gentleman who brought his foreign expertise for the benefit of the indigent people through his floated NGO called MGM.

The Newshawk Investigate, would reveal that Dr. Belel and family, attended the convocation ceremony. AmbP Mohammed Gidado Mohammed was also among those who were inducted.

However, a Dental Surgeon Dr. Saad Muhammad Dodo also a Peace Ambassador, ably representing the Dodos, explained to newsmen why his brothers were unavoidably absent.

“Why I’m deeply involved in this maiden convocation ceremony, is the Dodo tied to my name.

“It’s true that today is considered as multiple awards day in the family. Late Justice Dodo is given a posthumous award in Yola Adamawa state by IDC, a faith based organisation he served as grand patron till his death. Two of my brothers are conferred with honorary PhD. In fact three, because Dr. Belel is my brother from the same area and senior colleague in the medical profession. There’s also my niece, Muhammad Al-Amin by name, a immigration officer, whom some of the family members have joined in Kano to witness his passing out parade holding today, you know.

“Dr. Ibrahim Muhammad Dodo isn’t within reach, owing to official engagement. While Dr. Adamu Muhammad Dodo has missed a flight. He wouldn’t make it even if he should travel by road, which is of course, the longest.

“As an advanced party, Therefore, I’m here with my colleagues to represent the two Dr. Dodos and receive the 2018 best UN-POLAC state directors award credited to Dr. Adamu Muhammad Dodo

“He requested me to ensure that I assure the UN-POLAC that he has since started working on how to maintain this enviable best state directors position.

“The award, he said, remained as a challenge to do more, by being committed, diligent and dedicated to assigned responsibilities.

“The Dodos say thank you to UN-POLAC and to the entire invited guests who are on the chairs to share our joys and to cheer our successes untiringly without tears.

“That’s the longest remark I’ll make because I’m overwhelmed with everything about the event,” Dr. Saad said.

It should be noted that Dr. Adamu Muhammad Dodo the head of Information and media relations with FMC Yola, is the lead publisher and editorial board chairman of the Periscope Global Publishers an investigative mainstream and online media.
.
The Newshawk could not get to hear from Dr. Belel. His remarks with that of the celebrated Dodos, will therefore, make another story.