Who booted with live bullets, life out of Badeh? 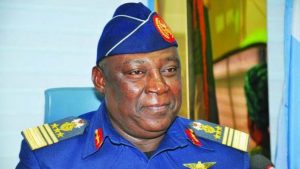 It was not at the waterfront. He was not flying, throwing bombs to dispel opponents at war or insurgents that hitherto captured Mubi his hometown using his house as enclave or their headquarters.

The retired Chief of Air Staff who flew two former US presidents and received a Koffi Anan award of recognition, was simply gunned down while driving back to Abuja from his farm in Keffi, it was said.

Who booted with live bullets, life out of Badeh? The butcher(s) remain(s) as much as the remains is yet taken to the cemetery, mystery;

Will autopsy be any necessary?

Could it be organised murder kind of hired assassination, to have been failed kidnapping or simply armed robbery that went brutally deadly?

This is left as a matter requiring serious investigation against any allegation.

“‪It is with a heavy heart that I regretfully announce the unfortunate demise of former Chief of Defence Staff, Air Chief Marshal Alex Sabundu Badeh, who died today, December 18, from gunshot wounds sustained when his vehicle was attacked while returning from his farm along Abuja-Keffi Road.‬

“On behalf of officers, airmen and airwomen of the Nigerian Air Force, the Chief of the Air Staff, Air Marshal Sadique Abubakar, commiserates with the family of the late former Chief of Defence Staff over this irreparable loss.

“We pray that the Almighty God grants his soul eternal rest.”

He attended Vimtim Primary School, Vimtim and went on to obtain his school certificate from Villanova Secondary School Numan in 1976 before proceeding to the Nigerian Defence Academy, Karina.

Alex Badeh was admitted into the Nigerian Defence Academy as a member of the 21 Regular Course on 3 January 1977. He was commissioned Pilot Officer on 3 July 1979. He commenced his flying career at the 301 Flying Training School on the Bulldog Primary Trainer aircraft in 1979.

He had an M.Sc. degree in Strategic Studies from the University of Ibadan.

Badeh was Commander of the Presidential Fleet, during the Olusegun Obasanjo’s presidency.

The Presidential Fleet Crew flew around the world frequently and by 2002, Badeh logged over 6000 flying hours shuttling VIPs, dignitaries, top government officials and Heads of State.

Badeh was given the green light to fly former United States Presidents Bill Clinton and Jimmy Carter on different occasions after extensive checks were done by the United States Secret Service.

Badeh’s professional dexterity on duty earned him commendation and an autographed pen from Koffi Anan the then UN Secretary after flying him to an official trip.