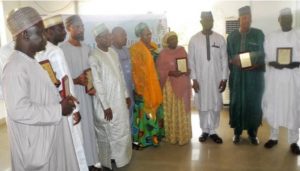 Adamawa Ministry of Health has Awarded six of the 21 local government areas in the state
for their outstanding performances in implementing Save One Million Lives (SOML) health programme in the state.

The Commissioner for Health, Dr Fatima Atiku, made this known at the 2018 Steering Committee Meeting and Award Presentation to Best Performing Local Government Areas in SOML Programme in Yola.

Atiku added that the awards to deserving local governments comprising Toungo, Madagali, Yola South, Yola North, Gombi and Mubi North was to ginger them to sustain the tempo and encourage those lagging behind to brace up.

She said that the state received such award at the national level and decided to do same to performing local governments in the state to motivate them.

Dr Abdullahi Belel, the Executive Chairman, Adamawa State Primary Healthcare Development Agency, lauded the commitment of the state government in transforming the healthcare sector and urged health workers at the rural areas to do their best to ensure it succeeded.

In their respective goodwill messages, UNICEF, WHO, HSMB and ADSACA lauded the Adamawa Government’s commitment to healthcare delivery.

The team of health officials from Bauchi State that attended the ceremony under the leadership of Pharmacist Abdulkadir Ahmed, lauded the successes recorded in Adamawa under the SOML programme.

The team was in the state to study the approach used to replicate same in Bauchi State.