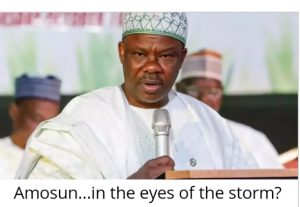 Ogun State Governor Ibikunle Amosun on Friday evening declared he does not fear forces within the All Progressives Congress (APC) working against his interests in the forthcoming general elections.

He said he only fears God and President Muhammadu Buhari.

He spoke when received a letter of endorsement from the Allied People’s Movement (APM) for President Muhammadu Buhari as its presidential candidate for the February 2019 presidential polls.

Amosun, who took delivery of the endorsement letter from the governorship candidate of APM, Hon. Abdulkabir Akinlade, at the APC Secretariat on Abiola Way, Abeokuta, the state capital, for onward transfer to Buhari, also insisted the Chief Derin Adebiyi-led excos will serve its four years term in full.

The Adams Oshiomhole-led NWC last Wednesday dissolved the APC executives in Ogun state and Imo State but Adebiyi has since dismissed the dissolution as an exercise in “futility.”

Amosun said: “You know me by now. For me, I fear God and I respect people. So, it won’t be because we are afraid or we don’t want to talk.

”We don’t fear them. All of them put together, we don’t fear anybody. We fear God and we fear President Muhammadu Buhari.

“Where we are now, what we should concentrate in doing is to let them know is that here in Ogun State, this is the home of President Buhari and we must vote massively for him.

“This is the home of APC. We must let them know that come February 16, 2019, by the benevolence of the Almighty Lord…

“We are human. We are no God and that is why we are telling them that in this coming election, in this Ogun State, it is whoever all of you (people) decide to back that will win the election.

“So, the best way to answer them is through our action. And what is the action? We will use our votes to let them know who owns this Ogun state.

“So, if they are looking for state to destroy them, they should not think of Ogun State. We are ready for them.

“We have decided to let them be for the sake of President Buhari. If not for the President, we know what to do.”

He went on: “Just ignore them. Don’t engage them for anything. Let us be focused and redouble our efforts so that in the coming election, we are going to answer them with our votes.

“I want to assure you that this executive that God has used you to put together, the executive will be there for the next four years. They will serve their term.”