Deconstructing the piece (A Non Romantic) 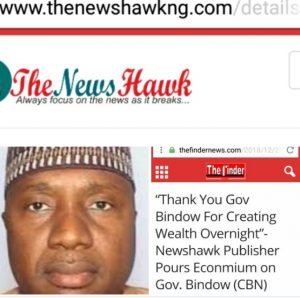 Meanwhile, It is a Christmas day Tuesday, having sent my domestic staff to their parents for a celebration, and my family to join the bigger family in preparation for wedding ceremonies, we must attend all, I resolved remaining indoors for supplications in avoidance of doing any evil, seeing any evil and/or hearing any evil.

Domestic staff must have left for the day they must have cherished most in their lives to celebrate. However, my family ought to be with me as worthy nurse tending to the helpless.

I had really no intention of joining issue with anybody. However, there’s a phone call I must respond.

“Everyone has a price as much as there’s a price for everything. I remember reading what you wrote.” The caller would say.

I waited patiently to hear how best would be his understanding of the philosophical form associated with my piece.

“The Newshawk publisher, indeed has a price for his seeming advertorial piece, commending Bindow with the giant stride by offsetting salary arrears of public servants with his brilliant idea of accessing a loan of N5b to that effect.

“The publisher equally advocated for another tenure for Bindow for doing what Adamawa elites aspiring for governorship won’t do.”

The caller said and deliberately, ended the call before I could get to respond.

There was actually no need for a callback when there is room for a hit back beyond phone call.

There were SMS messages challenging the principle behind the Newshawk radicalism. While some of the messages simply sought for my response to what they could conceive as betrayal of principles traded by the Newshawk.

Earlier, I explained in a telephone conversation with Mohammed Ismail, how his seeming satirical piece would be subjected to misunderstanding and misinterpretations. How his character would soon be assassinated and his professional standing, in spite of standard, be challenged even by fellow professionals who would hardly point out or suction a soaked saturated satire out of the piece

How the mischievous, rather deceitful and even the deceptive and deceiving minded, would take a fool’s full day celebrating on Christmas day, the change of a radical attitude to pro Bindow by the Newshawk as a family, as a redefined position.

What an attack on moral sensibility and ethics?

In the present electioneering atmosphere, with the jubilating-a-redeemed-salary-arrears minded, the Newshawk seeming satirical piece, would, by the uncritical minded, be bound for misrepresentation, misappropriation and misinterpretation, even if mischievously, not only by the psychopathic chronic-know-nothing about anything, but by those looking for a window to financial tipping by withdrawing decency to venture into such vendo with a view to attracting governor Bindow to their favour.

One Cleaf Cleaf, via WhatApp, sent me a link to a paper; self-aclaimed as “The Finder” claiming to be publishing from Benue state with stories and reports lacking bylines, harboring a house style, philosophy and taking to governor Bindow praises as a theology to evangelise, rather than proselytising issues on Benue and governor Ortom among the national essence and experiences.

The Finder published that the Newshawk publisher commended Bindow with the caption:

My reply to Cleaf square was “I don’t have this number in either of my social media groups, professional and/or phone contacts. However, do you know what satire means?

“The Finder, ought to finetune the basis of professional calling by embracing the act of critical than criminal thinking.

“Anyway, deconstruction of the piece
and the misinterpretation of a finder blinded by ignorance of the act
by means of my response, awaits in due course.” I responded.

Newshawk is a family of unrepentant and uncompromising radical journalists. I’m however not holding briefs for Mohammed Ismail as a personality for any responsibility.

In the first analysis, the borrowed headline of the piece from Bindow apologists as an end in itself, is satirical.

How can one who’s government is so insensitive to the survival of so many public servants and family be thanked for a politically motivated payment of outstanding salary arrears? Why now, not then?

How many families were impoverished by the clueless act to have lost their sick relatives and themselves to mother earth?

How many children sent out of school simply because their public servants parents couldn’t get to pay school fees.

How many farms were left fallow because there was no means for harrow, seeds and fertilizer?

How many village markets left barren of booming commercial activities owing to looming poverty occasioned by the non payments of salaries for months, in spite of the bailouts and Paris club refund funds, in addition to an improved internally generated revenue?

Should the governor truly be thanked? Mohammed Ismail seemed to he asking. The headline actually requires no any backtracking to fathom or conjure up the spirit within the form.

“Thank You Gov Bindow For Creating Wealth Overnight.” Non like any governor.

The wealth overnight would mean a reprieve to poverty at the 11th hour. Must of the public servants argued that they were highly indebted. Therefore, the outstanding salaries would be meant to pay outstanding debt and beyond, to be back to ground zero. They would never wish for further outstanding experience.

Truly, the gubernatorial aspirants either Modi or Ribadu would not forge a luxury life out of poverty by denying even a month’s salary. The public servants are left lamenting.

there’s however another hope in a trust that not Bello, the ATM Fintiri or Nyako a spirited welfarist, would ever deny workers their salaries to be accumulated up-to six months. Would not even think of plunging the state into bankruptcy associated with loans for salaries. The elites could be thinking outside the box with a view to getting the state out of deception, clueless administration, inefficiency and ineffectiveness.

The saturated market denied for six months, would have been a monthly routine since six months previously.

Here Mohammed Ismail where he said:

“I don’t understand why these busybodies failed to fathom the rationale behind the gesture of refusing to pay salaries for months until the amount is huge for everybody to become a millionaire before payment is done. If I may ask these “Amebos” are the workers not the better for it now that some of them have been made overnight millionaires?

“WHO CARED ABOUT THE TRAVAILS THEY (WORKERS PASSED (THROUGH) BEFORE (NOW)?

“Indeed some of the LG workers, I learnt, are now worshipping the governor for changing their fortunes and social status overnight. But the enemies of the governor won’t just see this gesture because of sheer enmity and envy.

“In fact, I never knew that Bindow was an economic genius until I started seeing the overnight millionaires he created indulging in life of luxury and saturating the markets with cash that I became aware of the economic impact of his simple and effective policy that only “Dainbaiwa” can conjure”. Ismael wrote.

Be a critical rather than a criminal thinker, could this be meant to be an encomium on or a satire spicing Bindow’s folly? I challenge the finder to find out.

“I want to concur with a supporter of the governor who in his expression of gratitude for Bindow on his face book wall said: “The governor should not only be thanked for saturating the state with cash and creating overnight millionaires noting that we must all vow to seek the governor’s forgiveness.” In deference with this counsel, I candidly wish to express suitable penitence to the governor for doubting his capacity and altruistic intentions toward all of us.”

is the finder still not clear about the satire with the piece?

Adamawa is elitist state to have been governed by elites, it has however fallen in government, into a hand that is parallel to creativity and critical thinking for which the likes of Mohammed Ismail have been battling against.

Do you think that Mohammed Ismail actually meant it when he argued that Adamawa should not be run by elites the “Yan Boko, meaning to say “so that the state will remained imprisoned by indebtedness?”