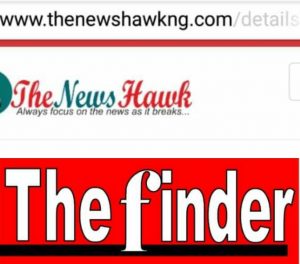 Yes indeed from Cameroon and Beyond, a river passes through to Yola up to Benue. It is christened River Benue. It meets with River Niger at Lokoja, the capital of Kogi state. The meeting of the parallel rivers is called confluence. This gives an idea to why Kogi is called the confluence state.

One wonders what makes the confluence between Bindow and the Benue’s the Finder at Dougirei Hill miles away from Lokoja; Is it because the government house in Yola is situated close to River Benue?

It has been the subject of reflection. The Newshawk editorial board would observe that enforsement of artificial confluence tied to financial inducement as a relationship between the duo, is damaging to professional ethics in journalism as well as to good governance and administration in Adamawa state.

Dagasouya lamented that instead of playing the PR to governor Bindow, having misunderstood the concept of and the style in satire, the Finder simply amplified what they ought to have counter in defence of its principal.

“I was initially miffed. But come to think of it. Is it the beneficiaries or one who’s a mirror unto society should arrogate to himself the perception of the beneficiaries as electorates that should do the thanking or otherwise?

“Prince would ask what econmium would have meant. A typographical error, I would have thought, telling him to read the story for clarification,” Dagasouya would say.

The satire was either ignorantly misunderstood or stylishly rather shamelessly misreported as read upside-down. The finder mischievously wrote:

The Publisher of the Newshawk online newspaper has taken to his blog to pour encomium on Governor Bindow for paying salary arrears of workers he inherited from Messrs Nyako, Fintiri and Bala Ngillari, Mr. Mohammed Ismail who is one of the critic of Gov. Bindow through his Christmas morning post has admitted that Bindow deserves second in office and that those claiming ignorance of backlog of salary Bindow inherited from his predecessor should bury the idea as he has confirmed that truly there was salary backlog the Governor inherited and that Bindow has created millionaires, with the publisher’s article on his news page, it means the publisher has seen the light in Bindow’s administration, Dasin opined.

“I can’t see in Ismail’s where he agreed that Admiral Murtala Hammayero Nyako, Rt. Hon. Ahmadu Fintiri and Barr. Bala James Ngilari as governors either separately or jointly, left 4 Months and 7 months unpaid salaries of workers respectively, in Adamawa state.

“Why is Fintiri called ATM machine?
Admiral Nyako implemented no work, no pay, against industrial action. Fintiri reversed the system and paid the affected two months salaries to earn him the “Fintiri, Fintiri” ATM onomatopoeia.

“What then was left as outstanding? The Finder couldn’t publish if at all there is, the details.” Prince would say.

Besides, the Finder, more than the state government owned the Scope newspaper in terms of projecting however unnecessary, Bindow’s activities, considered Mohammed Ismail as one of the critics of governor Bindo, was the Finder insinuating that the Newshawk is also established to attack Bindow, ignoring the fairness and objective investigative undertaking in its reportage?

“it seemed also that the finder agreed that Adamawa is being led by ignorance lacking meaningful initiative, finding alternative means of paying salaries other than seeking for loan. Else Ismail’s satire ought not to have been republished and shared by the Finder,” Prince would observe.

Yinka Dare a media expert, would argue that “the Finder cheaply promoted the Newshawk report against its paymaster; that is why on his part, Mohammed Ismail simply called on governor Bindow to rescue his government from media attack by reviewing his so-called media aids and apologists who destroyed in the name of defending the principal

“It’s a season of campaign, the time for election is fast approaching. Bindow must look for a dependable defender other than the Benue’s the Finder after Boxing Day, lest his leadership is boxed, even without glove, out of the ring,” Ismail said.