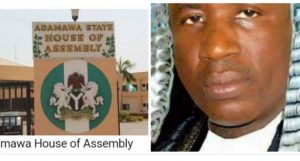 The Speaker, Adamawa House of Assembly, Alhaji Kabiru Mijinyawa said that his deputy, majority leader and his deputy are sacked.

He said that the house elected Mr. Lunsumbani Dili, APC, from Demsa local government area as its new Deputy Speaker.

Muhammad Hayatu is now the majority leader, while Muhammadu Sani-Shehu is the deputy leader.

The Speaker, however, did not give the reason behind the impeachment