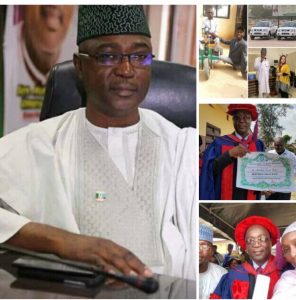 From his Facebook wall, Dr. Belel the unique achiever who made best use of the best of his time to take ADSPHCA to the best position in the country for so many years retaining it and to emerge, by international health rating, the 2018 Nigeria’s second best in state primary health care after Lagos, said that he was most grateful to God Almighty for a successful handing over the leadership of Adamawa State Primary Health Care Development Agency to the next in command as his tenure ended on, Thursday, January 10, 2019.

“I wish to thank all those I met along the way since my appointment to the end of my tenure. Your works speak for themselves!” Belel said.

Recall that among his activities within one week to the termination of his tenure, owing to his achievements, Dr. Belel has on Monday, January 7, 2019, received donation of 2 brand new twin-cabin Nissan pickup vans from the International Committee of the Red Cross (ICRC) in support of the on going PHC system strengthening in Adamawa State.

Similarly, Dr. Belel was credited for the hosting of five states; Borno, Sokoto, Kwara, Kano, and Yobe, in Adamawa State for a 3-day review of the implementation of Auto Visual AFP (Acute Flaccid Paralysis) Detection and Reporting – AVADAR, to accelerate Polio eradication in Nigeria, which was held from Tuesday 8th January, 2019,

“AVADAR, which is a combined Rapid-SMS and ODK eHealth tool, is proven to be an effective innovation that will not only enhance Polio eradication but strengthen disease surveillance in general.

“Special thanks to Bill & Melinda Gates Foundation for funding AVADAR and to WHO and NPHCDA for providing the highly needed technical assistance,” Dr Belel remarked.

Dr. Belel has indeed won too numerous to mention achievers awards, ranging from, healthcare, leadership to technocratic,philanthropy and humanitarian services.

The members of staff with the Adamawa State Primary Health Care Development Agency and indeed the entire workers with the primary healthcare centres across the state, were in sober reflection, Thursday because, the tenure of the genius, their chairman a man with human face that cultivated the culture of welfarism, leadership and administration, having the spirit of capacity development among other initiatives aimed at staff motivation, has come to an end, bearing in mind that Dr. Belel has no intention to have an extension of tenure against designed order; not even a day longer, the Periscope Global investigate would reveal.

The northern senatorial zone of the state, was the first to be subjected to sober reflection, when Dr. Belel was manipulated out of the 2019 senatorial race.

The zone shed tears, wept and is eventually crying of the endemic epidemic resulting from misrepresentation and the consultant “rapid-inefficiency-epidemiologist”, invited by the electorates to disinfect the zone from acute “malrepresentation,” was technically denied permit my means of fantastic manipulation at the poll during what literary critics considered as seeming fictional party primaries exhibited at the senatorial zone.

However, Dr. Belel is celebrated by the United Nations-POLAC assuring that the POLAC would inject its institution with the vial of Dr. Belel’s successes,” Dr. Halo Eton Director General UN-POLAC would say.

In his eulogy, Dr. Saad Muhammad Dodo the Dentist a Peace Ambassador, wrote the following:”

“I wake up this morning with the thought on how to get to succeed in every task given to me. Then you (Dr. Belel) came to my mind first and I started asking myself question. HOW WAS ALL THESE POSSIBLE?

“It is a fact that when offices make people, Dr. Abdullahi Dauda Belel, makes the office.

“No doubt, everything about you, is unique, as you always give the best result in every task given to you.

“‘A result oriented’, is summarily, the personification, you have proven to be; the best in all that you got engaged in, as I can see, you partake in all works of life with all interest and focus; with a zeal to its zenith, beyond the zinc and it ends with the best of the rest result.

“Certainly, it’s either because you always come well prepared or is it because you are exceptionally blessed or may be your attention and focus on everything you do, is different. It could be the composite of all of the above listed possibilities.

“I may as well be correct to say that you have the best set of brains in your company. I WANT TO BELIEVE THAT BEHIND EVERY SUCCESSFUL DR IS AN ENGINEER.

“You are just everywhere and all the time the best. No doubt you are a mentor.

“I want to grow up to be like you, though, you found me reliable, I’m still learning how to walk not to fall down as in failure at work; kind of upgrading from crawling.

“This is simply to say kudos to my mentors,” Dr. Saad Dodo.

Amb. Muhammad Gidado Muhammad Sarkin Dawakin Jimeta The founder and Director General, MGM Foundation said, he only got acquainted with Dr. Belel in December, 2018 during UN-POLAC induction of new Peace Ambassadors and convocation ceremony for the honoree PhDs at Uyo, Akwa Ibom state.

“I wish I’ve known you since. The brief encounter has exposed the achiever in you, having the spirit of a mentor, one ought to be proud of being identified with you. Congratulations sir,” Amb. Muhammad Gidado Muhammad said.

Yakubu Suleiman in his piece on LEGACY, articulated that:

“Dr Belel is an exceptional leader.

“The question that comes to my mind is that, who is going to perform half, just half of what Dr. Belel has done in ADSPHCA?

“How many executive officers believe on the result?

“How many leaders believe in fairness, collaboration, cohesion, unity with the spirit of teamwork and justice among their members of staff?

“How many chairmen go extra miles to think outside the box innovatively and ensure that they bring a project, prospect or programme to the state?

“How many administrators engage their members of staff in assignments and schedules based on professionalism and acquired skills?

“How many of leaders have the ability to perform and their efficiencies recognised at both national and international levels?

“How many leaders give appointments based on the capacity and capability of the employees devoid of godfatherism?

“How many leaders want their subordinates to excel to the next level?

“How many leaders encourage youth to display their potentials?

“How many managers cultivate the habit of work and worship, having the fear of God in their work as they manage?

“Dr Belel, in my opinion, and I’m not being romantic, is among the few, chairmen, executive officers, leaders and managers that have the descriptive leadership qualities.

“Dr. Belel, I must confess, knows the way, goes the way and shows the way out of maze, with a rather only meant for the creative, imaginative compass.

“Sir, history can never forget you.
You have done the best; taking Primary Healthcare in the state, from its hitherto state of decay to where it is today, has not been easy a task.

“My prayer is that let there be continuity, as we pray in God’s name, for your peaceful and successful journey to the next hopeful level.

“You are a GOAL with a gold medal of success. Yakubu Suleiman

Dr. Adamu Muhammad Dodo the Deputy Country President, United Nations-POLAC, in charge of the northern states of Nigeria, described Dr. Abdullahi Dauda Belel as “a man of peace and patience, serous, committed, diligent, dedicated, hardworking devoid of
deception, ingenious rather than injurious, foresighted rather clueless, achiever rather than deceiver, reliable and dependable.

“A promising senator, the northern zone of Adamawa state is schemed out from being blessed to have, an Ambassador with, a UN-POLAC certified Honorary Doctor in and of peace for peace.

“Congratulations for the worthy achievements, for the successful completion of your tenure, with cheers without tears