* We have no problem with bringing back Buhari… However, we’re tired of deception at the State level – Electorate 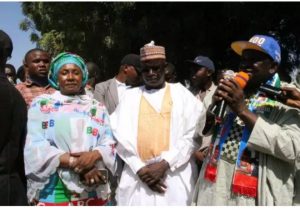 The All Progressives Congress APC in Adamawa was in Madagali LGA Thursday, to flag-off its statewide campaign tour for the reelection of Governor Muhammad Umaru Jibrilla Bindow and other candidates of the party in the 21 Local Government Areas of the state.

Flagging-off the campaign at a ceremony in Madagali, the state chairman of the party, Alhaji Ibrahim Bilal commended the Buhari led administration for the return of peace and normalcy in Madagali and other local government areas affected by insurgency in Adamawa state and beyond.

Bilal, shielding his plea under the Muhammadu Buhari’s achievements, said, the return of peace and normalcy against insurgency, formed the background reason, the people of the area would need to reciprocate by voting APC candidates in the election.

“APC government has brought peace and normally to you. You are back home and back to farm where you experienced bumper harvest this season, courtesy of viable government agricultural programmes. What else do we need in Madagali and other parts of Adamawa if not continuity?” Bilal throwing the rhetorical question.

In his speech, the Northern Zone Director General of “Buhari/Bindow” Campaign Organization, Mr Saleh Kinjir, who hailed from Madagali Local Government area, lauded the turnout of the electorates for the flag-off campaign, saying that it was a sign of acceptance and commitment of the people of the area to ensure they deliver massive votes for APC.

In their separate remarks, the APC candidate for Madagali/Michika Federal Constituency, Rep. Adamu Kamale and his counterpart of Adamawa House of Assembly, Mr Emmanuel Tsamdu, narrated the ordeal of the people of the area when Boko Haram took over the area in 2014 during PDP administration before the APC government reclaimed the area and restored peace and normalcy.

“How best can we say thank you to APC administration at the state and federal levels if not to return them back to continue the good work of rehabilitation and reconstruction of our area?” Tsamdu argued.

Speaking on the campaign, an APC chieftain and the protem National Vice Chairman Northeast of the party, Umar Duhu, lauded the turn out of the people, which he said was a clear signal to other political parties particularly the PDP.

“I am overwhelmed and full of joy for the crowd I saw, which means that we are going to harness our votes for APC starting from Mr President and National Assembly members on 16 February and Gov. Bindow and others on March 2.

“The candidate of PDP, Umaru Fintiri is from this area and was even the acting governor of Adamawa when insurgents took over the area.

“Our people are angry with Fintiri because he did not help them that time but compounded their plight then by declaring 24 hour curfew in Madagali, which prevented them from escaping before insurgents took over the area,” Duhu creatively debated.

“We are happy with the reception we are getting from the people of Adamawa and have no doubt about our reelection because we have something to showcase,” Abdullahi said.

However, some of the electorates, The Periscope Global Investigate interviewed in Madagali, are agreed that President Muhammadu Buhari is known for integrity. Is a man of his words, the people’s choice whom God has helped, owing to his good intentions, to defeat the insurgents as he’s gradually dealing with, to end the corrupt system.

“We have no problem with bringing back Buhari. There’s no need for such campaign. However, we’re tired of deception at the state level when outstanding salaries are only paid to earn political mark among other insensitivities.

“We’re only seeing most of these faces because it’s political harvest in a land left barren of resuscitation, rehabilitation and reconstruction in spite of the interventions.” the electorates lamented.