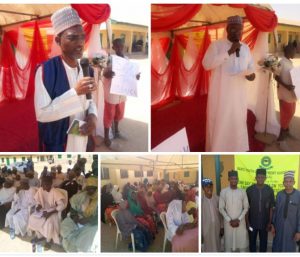 * Political thuggery is a desperate attempt by the over ambitious, defeated politicians to rig election – Adamu

* Those who led the country at 30s, are at 70s, still the leaders, while the 20 and 30years old are, for the most part, unmarried, are still breastfed. How Prepared are the Youth to take over leadership responsibility? – Dr. Dodo

The Bako Youth Development Association (BYDA), Yola South local government area of Adamawa state, Nigeria, as part of its mandate to get the youths in Bako ward out of the maze, aimed at societal reorientation as a social responsibility, has organised a One-day sensitisation lecture against the youth involvement in election violence as political use and dump political thugs.

Participants as invited guests were traditional rulers, religious leaders and organisations all the political parties, parents, other youth and women groups.

A paper presented during the occasion, which encouraged the youths to get prepared for taking the leadership of the country in 2023, by shunning away from political violence and ponder over the positive future education could get to offer, was presented by Malam Lawal Adamu a lecturer with Adamawa State Polytechnic, Yola.

The paper was discussed by Dr. Adamu Muhammad Dodo the United Nations-POLAC’s country vice president northern states of Nigeria and the lead founder of the Periscope Global Publishers.

Those who were the rulers in the early Nigeria and the renegades who plunged the country into civil war and those who took the victory in bring back Nigeria together, were both the youths of mid 20s and 30s, the age presently, for the most part, occupying their parents’ living room watching movies, music and sports, solely depended on their parents, having NCE, diploma and/or degree certificates they could not defend, degenerated into hemp smoking, alcoholism and drugs addiction that made them vulnerable to any form of violence and criminality. While the youths as leaders in the early Nigeria, are in their 70s, still leading the country.

The guest speakers have jointly called for a retreat to youth rethink and societal reorientation, calling on parents to take full responsibility to inculcating moral values to their children and that the politicians should learn to cultivate the philosophy of politics without bitterness by shying away from supplying drugs and weapons to the youth for political violence.

Bako Youth Development Association is a nongovernmental, apolitical, and nonprofit organisation, registered in 2017.

BYDA has its mission linked to community and humanitarian services.

BYDA, which started with less than 20 youths, is now having over 800 members and still counting steadily and surely, for having the blessings of women, community elders, traditional rulers and the elites to its activities.

All. Harman Tukur Ribadu is the grand patron of the association.

Earlier in his welcome address, the chairman of the association comrade Abdulrazaq Gidado, said that the members of BYDA were not without future ambition; there were the undergraduate students, there were the graduates, the employed, the and the artisans among them.

Gidado listed the achievements of BYDA to include participating in community sensitisation on the need for hygiene and immunisation, organising coaching classes and participating in voluntary teaching in Bako primary school, in addition to organising various skills acquisition trainings, which drilled women with the art of being self-reliant among other empowerment intervention initiatives.

Gidado revealed that over 60 members of BYDA have joined INEC at ad-hoc level, for the 2019 electioneering exercise.