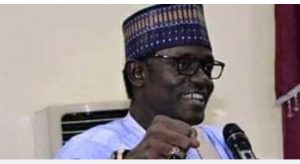 The ruling all progressive congress (APC) National secretary and Yobe gubernatorial flag bearer, Hon. Mai Mala Buni is just like every other politician in Nigeria however, his Doggedness, grassroot mobilization skill, astuteness, consistency, selflessness, words, equities, loyalty and his cultivated reputation among other too numerous to mention attributes speak volume.

Mai Mala Buni’s match, in sure a near political realm, is to say the least, so rare.

Hon. Mai Mala Buni is a political gladiator that one will always want to be close to during political wars, especially the forthcoming general elections.

Buni is expendable and always ahead of his oppositions. He has remained a thorn in the flesh of the powerful opposition in the 2015 general elections that dethroned the serving government and enthroned APC government to power.

Buni is on the vanguard for the match to the next level, to defeat the opposition parties In-shaa Allah (God willing) come 2019 general elections.

What makes Buni unique and unquestionable, is the cultivated habit of patience and tolerance, in addition to holding onto the philosophy of all inclusiveness also as a leadership style, irrespective of tribe, religion, status or political inclination. His political background is one of a kind.

When judged by how well he is able to operate without hindrance, his record is solid.

Another of his unquestionable principle is the reactions and actions to internal crisis in the party, as the national secretary with a constraint office, offers a great insight into his approach to the job.

Buni’s meticulous services speak volume, because since his inception as the national secretary of the ruling all progressive Congress (APC) in 2014 to date, there is no signal by individual or group, which challenges his ability or competence in handling crisis of a constraint office.

Hon. Mai Mala Buni has in recent times, proven to be outstanding Nigerian of no mean repute and achievement, the desire and concern of every genuine APC and Yobeans today is for Buni to emerge as Governor come general elections.

Buni is resilient and absolute. He is an epitome of loyalty and hope, an unrepentant defender and diehard apologist of APC who left thorn of pains on the ass of the opposition.

It follows therefore, without any iota of doubt or contradiction that Mai Mala Buni is the best Man to fill into Gaidam’s large shoes. For the job of such a highly constraint office, he is tested and trusted and attested to be the best man to pilot the state to the world it is destined to be.

Yes, together we can make it to the Next Level.