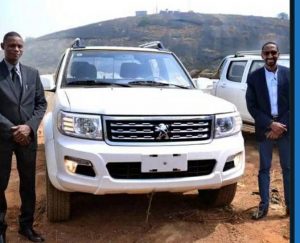 Director General of National Automotive Design and Development Council (NADDC) Jelani Aliyu (MFR) with the Managing Director of Peugeot Ibrahim Boyi, shortly after putting the new vehicle to test through the rugged terrains in Abuja, Nigeria

With the introduction of the new Nigerian made Pickup, Peugeot has after fourteen years brought back an icon, and this time, in an even more robust, more functional and cost-effective manner.

This recent development, according to industry experts and stakeholders, exemplifies the Nigerian automotive sector’s continued growth as a result of the implementation of government policies by the National Automotive Design and Development Council (NADDC), which are squarely aimed at promoting local automotive production, generating jobs, building the economy and saving crucial foreign reserves.

The Director General of the NADDC, Jelani Aliyu (MFR) made these affirmations when the new addition to the Peugeot stable was taken through its paces in order to experience the vehicle’s off-road capabilities.

He said the Nigerian government is continuing with strong efforts on diversifying the economy away from the singular concentration on crude oil while promoting agriculture, mining and industrialization, pointing out in matters of industrialization, that no other sector could play such a significant role as the automotive sector due to its ability to create thousands of jobs, both direct and indirect across the entire value chain, including from of Original Equipment Manufacturers, component suppliers, logistics partners and after sales services providers.

The director general disclosed that the Peugeot’s new Pickup, made in Kaduna, is the company’s first since the last run of their 504 Pick-Up in 2005, saying the new functional vehicle is being offered at an affordable price point because of the fiscal incentives conferred to local automotive producers by the federal government of Nigeria.

According to him, “The application of only 10% duty on Semi Knocked Down (SKD) kits, and 0% on Completely Knocked Down (CKD) kits, enables credible manufacturers to transfer the savings directly to customers and end users, making these new generation vehicles such as the new Peugeot Pick-Up attainable

Empowering manufacturers to produce locally also gives them the capacity to strategize, develop and offer vehicles that are engineered to specifically meet the extreme demands of the Nigerian environment, such as rough terrain, high temperatures and varying fuel qualities, Aliyu said.

“As a result, companies that produce vehicles in Nigeria offer effective products that are extremely suitable for local applications; vehicles good for both urban and rural areas and which can easily access rough and remote areas for agricultural logistics, deployment of crucial government services, and the promotion of trade and security’, He noted.

Shortly after putting the vehicle through its pace, alongside the Managing Director of Peugeot, Mr. Ahmed Boyi, the director general said from the sands of the Sahara, the banks of the Zambezi and the incredible grasslands and wide open skies of the Serengeti that such wonders are the real Africa.

According to Aliyu, “Nigeria itself is blessed with fantastic landscapes and natural environments, the magnificent rock formations around Abuja exemplify these wonders, it was these settings that provided a background for the test drive of the newly unveiled Nigerian made Peugeot Pickup”, he disclosed