* This is technically a final word of the unrepentant rather shameless defeated, who has self than the nation a heart – critical thinker 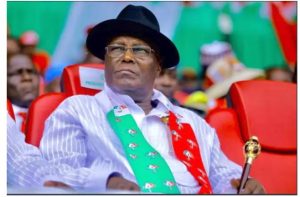 The Peoples Democratic Party, PDP, has rejected the results of last Saturday’s Presidential and National Assembly elections being announced by the Independent National Electoral Commission, INEC

The PDP National Chairman, Prince Uche Secondus, addressing a press conference in Abuja Monday, described the figures being announced by INEC as incorrect and totally unacceptable.

Secondus argued seriously, in search of seconder to the allegations of electoral fraud in favour of the ruling All Progressives Congress, APC.

“The results are fraught with “irregularities” and therefore, “incorrect and unacceptable.

“Our collation centres have the original results from all the polling units in the country. That is from where we are going to reclaim our results,” Secondus said.

Secondus in a serious search of a seconder, throwing a persuasive bait for a thuggery catch, insinuated that the election results should be resisted by Nigerians.

“The results are incorrect and unacceptable to our party. Officials of the APC working with INEC have decided to alter results to affect our people. This must now be resisted by every well-meaning Nigerian.

“INEC must live up to its responsibility. They are under pressure. We have the facts and when the time comes, we begin to release them.”

The Periscope Global reporting politics, getting the response from the public, will reveal that the electorates have since dismissed this as a gimmick, as Orubebenation of the 2019 electioneering atmosphere.

“This is technically a final word of the unrepentant rather shameless defeated, who has self than the nation a heart,” a critical thinker criticised

“Secondus should be schooled to given a second thought to his or his party’s statement,” Rabiu an electorate based in Abuja remarked.