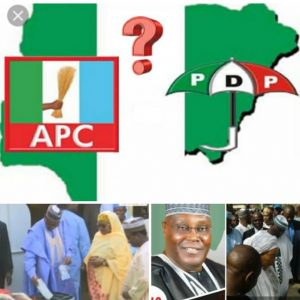 It is now crystal clear that Muhammadu Buhari of the All Progressives Congress is heading for a crushing defeat of Alhaji Atiku Abubakar, candidate of the opposition Peoples Democratic Party.

There had been surprises and upsets in many states as the results were announced, but not predicted was that the APC candidate, vilified on social media by PDP warriors, on the pulpits by bigoted hate preachers, would return a resounding victory against PDP.

Here are some of the lessons learnt in the February 23 election:

1. Social media power overrated: If elections are won on Twitter and Facebook, President Buhari would by now be writing his handover notes and be preparing to tend his cows on his farm in Daura. But the limitations of the social media platforms especially Twitter have just been exposed by the results of the election. The candidate of the PDP got more retweets, more likes for tweets by supporters on Twitter, but such preferences count for nothing in the real voting. For information, although there are over 92 million Nigerians using the internet, not all of them are connected to the social media platforms.

According to some verified statistics, about 25 million Nigerians use Facebook, with 16 million being active users.

This may explain why the orchestrated campaigns of falsehood and calumny against the APC candidate did not get much traction going into the election. As past elections had shown in Nigeria, the people who vote are the ordinary people, the peasants, petty traders, artisans who are not wired to the social media platforms. And they have spoken in favour of the candidate they believe is the greatest friend of the ‘Talakawa’.

2. Elite power, pulpit power has been smashed by the results of the election. Those hate preachers who abused the pulpit to command their congregation to vote for the PDP have been put to shame. Elite in the north and south who believe Buhari has been ‘bad business’ and worked vigorously to dethrone him, now also know their powers are limited. The ordinary masses hold the master key to ‘people power’. Buhari, like in 2015, has overcome elite gang up and conspiracy of the churches. In Abuja, the votes recorded in Kubwa, Garki, Mbappe and some other places with a wide Christian population and civil servants against Buhari were to some extent offset by farmers living in the villages around the capital.

3. Politicians who put a lot of score on endorsement now should know better. The Afenifere in Yorubaland and the various political groups largely failed to mobilise the votes for Buhari in the region, despite their endorsement. The results in Lagos, Ogun, Osun, Ondo, Ekiti, Oyo were too close to show that the people did not heed the instructions of the groups. Ohanaeze was also rebuffed to some extent in the south east states. The Northern Elders Forum of Ango Abdullahi, the Middle Belt Forum, the Arewa Consultative Forum need some reality checks about their power as opinion moulders.

4. The fourth lesson is that Igbo appeared to have learnt some lessons from their one-basket political disposition in 2015. In 2019, they did not put all their eggs in one basket, as they gave Buhari more than 25 per cent in Ebonyi, Abia, Anambra and Imo. Only Enugu gave Buhari the snub as the opposition recorded a thumping victory here, 355,553 votes to Buhari’s 54,423. In Lagos, however, Igbo voting pattern like suspected in 2015, unsettled their Yoruba hosts, leading to threatening inter-ethnic hostility. Yoruba believe that Igbo should always support their interests, afterall ‘When in Rome, one is expected to behave like the Romans’.

5.All politics is truly local. Kwarans demonstrated this in the way they humiliated the PDP and its chief strategist, Bukola Saraki, rejecting the campaign of ‘better Nigeria’, ‘making Nigeria work again’, for home grown wild fire campaign of ‘O To ge’, which translates to “Enough is Enough’. The campaign dethroned Saraki from Kwara central senate seat and smashed the PDP into political irrelevance, with the APC recording 308,984 votes, two and a half times more than the 138,184 votes recorded by the PDP. In Daura, Katsina, voters showed the APC senatorial candidate that he needed to settle with them as they clobbered him, by voting for the Accord Party candidate, in the same polling unit, where Buhari recorded over 700 votes to three for Atiku. In Kogi state, Dino Melaye won a return ticket to the Senate despite all the controversies he generated. He will need to thank fumbling ex-police chief, Ibrahim Idris for making him popular with his people. And in Bauchi, speaker Yakubu Dogara survived his expected political demise and won fourth term ticket in his Bogoro/Dass/Tafawa Balewa Federal constituency.

6. Buhari is the only politician in Nigeria today with a solid home base. President Buhari has proven once again that he is the Awolowo, Aminu Kano of our time, posting overwhelming victory in his home state of Katsina and other states, such as Kano, Zamfara, Kebbi, Kaduna, Jigawa in the North West that he had consistently won since 2003, when he made the first bid for Nigeria’s presidency. Buhari also showed commanding presence in the North east. Atiku failed to show such political force in his state of Adamawa that he won with a few thousand votes. Then to show how Buhari has gathered much political traction since elected in 2015, he had a strong showing in states, such as Benue, Plateau, Taraba, Nasarawa, with high Christian population, that Atiku thought he would have won convincingly, based on the propaganda that Buhari is anti-Christian. Buhari similarly cut inroads into South South and South East states, denying Atiku any Tsunami effect from the zones.

7. Finally, lies, falsehood do get their comeuppances in the fullness of time. This election has proven this. Buhari in the run-up to the poll was the target of so many vicious lies and propaganda. The most reprehensible lie was that he was a clone from Sudan planted in Aso Rock. He was also painted as a hater of Christians, who allowed Boko Haram to seize a Christian girl Leah Sharibu. They accused him of promoting an Islamisation agenda and of being an ethnic bigot who favoured his region in appointments. Some even said he had finished Nigeria with foreign debts, a claim that was not supported by available facts. The opposition will need to invent new lies now as the President has posted a most crushing defeat of their candidate.