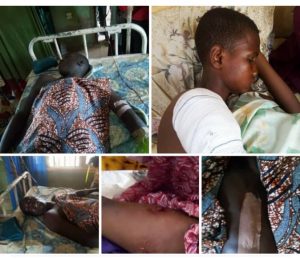 Reports from Numan local government area of Adamawa State Wednesday, alleged a Nigerian Soldier to have opened fire against a group of Muslims celebrating President Muhammadu Buhari’s victory in the 2019 presidential election.

According to reports by the Adamawa State Director Jama’atul Izalatul Bidi’a Wa Iqamatussunnah JIBWIS Social Media, Malam Abdurrasheed Yahaya, the jubilation was not comfortable to a group of Bwatiye Youths who alleged that it has destroyed some of their properties hence must be disrupted.

The allegation for which the casualties of the trigger happy soldier denied.

The disruption of the jubilation by the disenchanted was said to have attraction the attention of the security officers.

The soldier was said to have returned to the jubilating youths and opened fire at them.

The casualties of the trigger happy soldier are admitted at the General Hospital Numan, Grace Land Hospital Numan and Specialist Hospital Yola.

Malam Abdurrasheed, representing the JIBWIS, has therefore called on the Federal Government, the Nigerian Army to intervene for a redress.