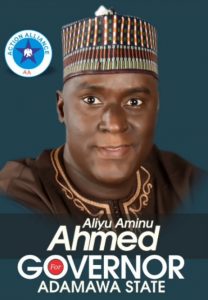 Alhaji Aliyu Aminu Ahmed AAAA always the trustworthy, whose character is excused rather than accused.

Whose ingenuity in generosity to the indigent community and family famished by famine and the unfavoured by ineffective and inefficient system, resulting from the cluelessness in governance, knows no barrier.

Whose philanthropic contributions to communities across the country through his international nongovernmental organisation, I’ve been acquainted with for over a decade, as a social responsibility, is summarily beyond comment.

Little wonder the triple and quadruple “A” associated with his aspiration and personality, the Periscope global will figure out.

Now that Allah SWT has answered the prayers of Nigerians and has decided for them the most fitting president and legislators at the national assembly, there was however one remaining, rather serious assignment; getting a governor that would commensurate the PMB ideals, irrespective of political party affiliation because APC led government in Adamawa state has betrayed it’s teeming citizens in terms of social amenities and welfare, Youth and women empowerment, health and education, security and mutual coexistence devoid of ethno-religious sentiment and an unmotivated civil servants, in spite of the fact that state was plunged into terrible debts, with no reconcilable development to account for it.

AAAA said he would be the most fitting candidate for a governor in Adamawa state. He has no corruption allegation against him. There’s no acrimony or animosity other than Aliyu Aminu Ahmed for everybody. Besides, PMB said the electorates should vote for credible candidates of their choices not necessarily, from the ruling party if the ruling party candidates presented, appeared to be nothing but disappointment.

AAA said that being a significant stakeholder in the return President Muhammadu Buhari project, he has an obligation to advice the president on developmental issues and policies for success.

It is based on this that the AAAA of AAA called on Buhari to develop a long-term plan for Nigeria under what he would want named as vision 2070.

Taking us back to analytical memory lane, AAAA reflected on the the making of vision 2020.

“Nigeria has developed a vision 20:2020 to be a large, strong, diversified and competitive economy that effectively harnessed the talents and energies of its people and responsibly exploited its natural endowment to guarantee a high standard of living and quality of life to its citizens.

“It was a laudable vision with several strategic themes around; Better quality of life for all, Sustainable economic growth, Affordable quality (infrastructure), High performing government and Safe and secure lives.

“The vision was widely received and it shaped policies of Nigerian Government in especially SOCIAL – building a peaceful, equitable, harmonious and just society, ECONOMIC – developing a globally competitive economy; INSTITUTIONAL – having a stable and functional democracy; and ENVIRONMENTAL –achieving a sustainable management of the nation’s natural resources.

“The Vision 20:2020 was followed by numerous Agendas; Seven point Agenda, Transformation Agenda and the “Change Agenda” which was reformed by the FGN to Economic Recovery and Growth Plan (ERGP) due largely to the economic realities experienced by the current administration.

“The “Change Agenda” had six pillars of ; Social Development, State and Regional, Economic, Infrastructure, Governance and Security and Environment encapsulating much of vision 20:2020 priorities.

“The ERGP built on the “Change Agenda” and identified key priorities to turnaround interventions and enablers in order to generate concrete, viable and visible impact.

AAA lamented that in spite laudable initiative and planning efforts, the policy would terminate in 2020. He therefore, proactively preferred solution befitting to its continuity, having decided the next level.

“I’m hereby calling on President Muhammadu Buhari to as a matter of urgency develop a comprehensive “National Development Agenda for the next 50 years – Vision 2070!” to enable Nigeria chart a new cause for development while recognising the need to have more inclusive government.

“Having a 50 years development plan will be consistent with African Union 50 years “Agenda 2063” Strategic Framework. It’ll also enable Nigeria as a country to meet up with Sustainable Development Goals (SDGs) 2030.

“This request is urgent, vital and timely. I hope Mr. President will give it all the necessary attention and urgency it deserves,” AAAA said.

AAAA as AAA gubernatorial candidate, the creative and innovative minded said he would designe a 50 years development plan for Adamawa state, beginning from 2020, given the opportunity to serve as governor to be decided by the electorates next Saturday. 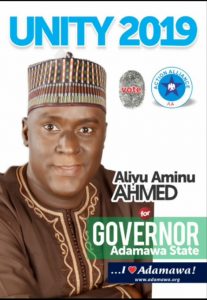