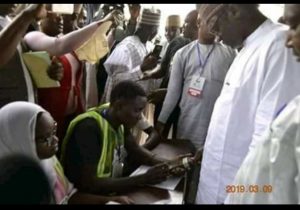 Yobe state recorded overwhelming turnout of voters for the governorship and state assembly elections, Saturday. this development could not be unconnected with the aggressive campaign launched by Hon. Mai Mala Buni APC gubernatorial candidate.

Even though, it may seem to be a walkover as the Periscope Global reporting politics earlier projected, Buni worked tirelessly round the clock exhibiting his strength, resilience, patience, human relations and leadership capacity and capability, canvassing for votes across the state.

After the campaigns, Hon. Mai Mala Buni joined the teeming electorates, Saturday to cast his votes.

The Periscope global correspondent in Yobe, reported that after having been accredited, Buni exercised his franchise, mandating himself at his polling unit of Bulturi Yemari lewe gate, code 004, Buni gari ward of Gujba local government area council, situated at GDSS Damaturu,Yobe state.

It was indeed an overwhelming turnout of voters as this polling unit recorded more number of electorates compared to the previous presidential and national assembly elections, which victory to APC throughout the race. 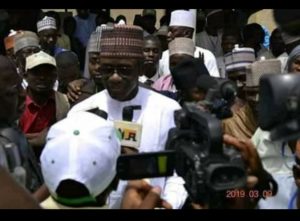 Addressing the newsmen, Buni expressed his satisfaction with the conduct of election he considered as free, fair and peaceful, hopefully to produce credible results.

Buni was equally impressed with the large turnout of voters, with the prayer that APC would emerge as the overall winner.