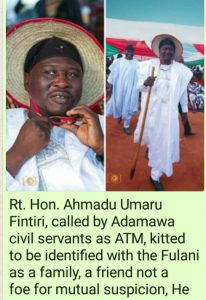 It was an inconclusive Saturday in some states as defined by the outcome of the gubernatorial elections, being declared by the INEC

There was a street protest in Kano, Governor Tambuwal would seek to know the constitutional backing of the “inconclusive” clause, he could conceive, was a mere manipulation aiming d at short changing him. APC, in a press conference in Yola, vehemently rejected the entire electoral exercise as being compromised, aimed at, to throw Bindow of Adamawa, out of the window, even though, by the door he misplaced the key, was he taken to Dougirei Hills in 2015, while his deputy Babale, who was reported to have cursed a media, mediating to have him maintain his office, is said to have had his family, nocturnally, evacuated out of government house, as a sign of conceding to defeat.

While jubilation turned riotous a bloody in Taraba to have reduced Jalingo the state capital to a 24 hour curfew. Rt. Hon. Ardo Fulani ATM Fintiri the PDP gubernatorial candidate in Adamawa state, whom the polls, have so far favoured to victory, having commended the people of Adamawa for the support, simply called for calm, in honour of the declaration, by the INEC, of Saturday’s gubernatorial polls as inconclusive.

Adanawa runs a one big family and human blood is costlier than gold to spill base on politics, Fintiri would seem to be conceiving.

Rt. Hon. Ahmad Umaru Fintiri, has urged Adamawa people to remain calm in the face of the declaration, while responding to newsmen.

The courageous, rather radical Fintiri, said, he has no fear about the re-run election, having had confident in people’s support for his victory.

Fintiri, having appreciated the people of the state for their perseverance and support, pleaded with the electorates in the polling units across the state, where the re-run elections would be conducted anytime soon, to come out enmasse and entrust their mandates to him and the PDP.

Fintiri commended INEC and security operatives for their show of maturity and professionalism during the polls, urging them to maintain the tempo.

Fintiri said that the convincing victory he recorded at the polls, was indeed, a signal of his acceptability across every nook and cranny of the state, adding that the development showcased not an as outcast for any prodigal consideration in him but true son of the state.

“Adamawa state is my constituency, that is why I win convincingly. Insha Allah, I will win the re-run election.