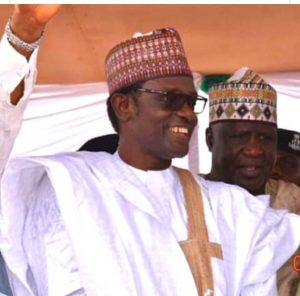 The electorates as delegates for mandate have adequately presented the wishes of the people of Yobe and God Almighty, has answered their prayers to the next level.

The people of Yobe invited Hon. Mai Mala Buni to take the mantle of leadership as governor to lead the state to the next level.

Buni’s generosity, integrity, transparency, capacity and capability, are tested and trusted to give appetising leadership taste to the next level.

The euphoria that greeted the victory is beyond expectation for any comment; a commitment to the next level.

The periscope global is left with no other option than to suspend the congratulations for a registered commiseration and wishes that May God guard and guide Mai Mala Buni through to the next level.

We’ve followed the campaign train, we’ve reported the event showcasing Buni not only in Buni Yadi but the nooks and crannies of Yobe more than any other contestant as we’ve projected a walkover. It simply defines your victory to the next level.

You promise to run an all inclusive government not to have an inconclusive achievements as much as you’ve invited all responsible and responsive sundry, irrespective of political leaning, to respond by joining a call to a successful journey to the next level.

Ours as media mediators, be rest assured, we’ll follow issues, news and events in Yobe and beyond to mark your footprints, beginning from the day you will be sworn in come May, 29 as the governor of Yobe state, signing a takeoff journey to the next level.

Your political party; the ruling party, is proud of you as every victory goes to APC in Yobe; simply rather than hacking, hearkening to the call to the next level.

HE governor Kashim Gaidam, currently one of the elected senators, indeed deserves commendations as well for having completed hitch free two terms tenure and for answering a representational call to the next level.

It is hoped that other elected lawmakers at both the national and state house of assemblies in the state, will cultivate the spirit of teamwork for the success associated with the next level.

we’re collaborative partners as we will keep on checkmating the hitches that will undermine a successful journey to the next level.