By Godswill Otuekong Etuk, from Calabar 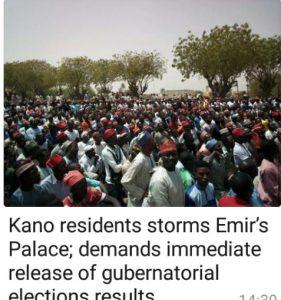 * Even those who sold their votes for as little as 1K, free food (just a meal) and kerosene in Akwa Ibom, Cross River and Abia state are saying northern voters are illiterates. Lol

If Governor Ganduje finally loses, it won’t be because he performed poorly compared to Udom Emmanuel of Akwa Ibom, Ben Ayade of Cross River or Okezie Ikpeazu of Abia who have been re-elected for a second term in their respective states.

Ganduje won’t lose because the people of Kano love PDP more than they love APC. It’s beyond love for party.

It is about the dollar saga. That video of Governor Ganduje collecting bribe from a certain contractor that went viral. The governor could not comprehensively explain exactly what happened in that video to the people of Kano. So they’re offended. They’re angry that their governor was involved in corruption.

They don’t want such a man to continue to serve them as governor.

While you’re celebrating in Uyo, Calabar and Umuahia over the re-election of governors who have done worse things in their states than taking bribes from contractors, the people of Kano have demonstrated in this election how we can stop corruption in Nigeria.

Kano has shown us all how to hold our leaders accountable. They have shown that power belongs to the people.

Those who call northern voters almajiris are senseless. A northern voter who votes out Ganduje because of corruption is two hundred times better than anyone in the SS and SE who votes for and celebrate corrupt politicians regardless of his/her level of education. 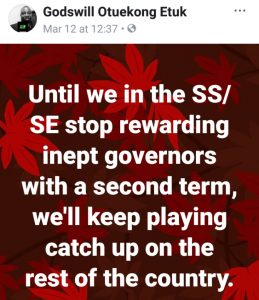 We need to copy Kano if we are serious about moving Nigeria forward.