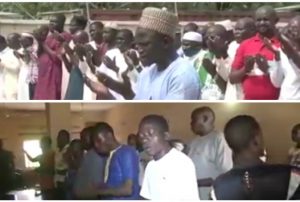 * It is not only wrong but a clear path to anarchy. However, is Dr. Aldo aware that governor Bindow violates court order on the issue of monarchy in Jalingo-Maiha? – an electorate

* Don’t ask me about the Kannywood and the Hausa lyricists, I thought they would counter the “O jippa tan” lyrics – Political pundit

Adamawa 2019 electioneering atmosphere clears ground for critical thinking based on divergent opinions resulting from its outcome for a way forward.

Whilst some group of Adamawa elites led by Babachir David Lawal and HE Boni Haruna read no hope for Muhammadu Umaru Jibrilla Bindow the APC gubernatorial candidate, hence have suggested a safer landing for him in conceding defeat to Umaru Ahmadu Fintiri the PDP gubernatorial candidate, Rev. Eric Theman Dollars and Dr. Umar Ardo would argue that the court order must be honoured for not only the suspension of the gubernatorial rerun election but the cancellation of the entire exercise that gave room for the rerun election.

“Conceding defeat is an honourable thing to a good leader following a clean and credible elections that produced a winner, not when the whole process was characterise by a lot of irregularities, which clearly seen to have marred the election,” Dollars said.

Dollars said that governor Bindow of All Progressives Congress (APC) and Fintiri of People’s Democracy party (PDP) were candidates whose scored votes were being challenged before the High Court as a result of the refusal by the Independent National Electoral Commission, INEC, to include the logo of his party in the March 9th, 2019 governorship election.

“I thought by now the so-called elites should think on how a fresh election will be conducted in the interest of all Adamawa state sons and daughters that are wishing themselves well on who will become the next governor of the state,” Dollars said.

Rev Eric Theman Dollara is the gubernatorial candidate of the Movement of the Restoration and Defence of Democracy (MRDD) that filed a case before a Yola High Court against INEC for omitting his party logo on the ballot papers.

Adamawa high court hearkened to his prayer by directing INEC to suspend the rerun election and in another prayer, to cancell the entire gubernatorial election held in Adamawa state for a fresh, no disenfranchised exercise.

INEC in Yola however said it would conduct the rerun election in spite of the court order because Yola High Court lacked the jurisdiction to stop the electoral umpire from carrying out its statutory obligation.

On his take, Dr. Umar Ardo a PDP stalwart said INEC must not disobey court order, should the order has any constitutional merit.

Aliyu an electorate in Jalingo-Maiha, responding to the Dr. Ardo’s position, argued that Bindow remained the government that did not honour court order.

“I agree with Dr. Umar Ardo, It is not only wrong but a clear path to anarchy disobeying court order. However, is Dr. Ardo aware that governor Bindow violates court order on the issue of monarchy in Jalingo-Maiha by declining to approve the legitimate district head even when the case is not a stay of execution pending the outcome of the appeal?” Aliyu asked.

The PDP in Adamawa state, in preparation for the gubernatorial rerun election, Saturday, identified inconsistency in the INEC’s polling Units record, which Barr. Tahir Shehu the state Party’s chairman argued, would be capable of undermining the credibility of the exercise.

The challenge was on the 2 additional polling units. Why were the units omitted before and/or why would they be factored in?

Tahir however called on the electorates in the affected polling units to come out en masse and guard jealously their rights of mandate using PVC, not to be self-disenfranchised.

meanwhile, preparatory to the rerun election, some Muslim and christian youths in Adamawa state, acting the prayer warriors, organised themselves at the PDP secretariat to pray for peaceful conduct and the victory for Fintiri in the Saturday rerun election.

A political pundit observed that Bindow was gradually loosing supporters. Even the juvenile social media group called the Ipadians, who took a vocation insulting anyone who objected to Bindow’s weaknesses for a miserable amount, have gone on vacation. They could gradually be hibernating.

“This is the time they could be showing support to their principal; they could even help in organising prayers as the faithful supportive of Fintiri have done.

“Don’t ask me about the Kannywood stars and the Hausa lyricists, I thought they would counter the “O jippa tan” lyrics. Or is it that they have terminated their millions of naira contract during the rally at Ribadu Square? Bindow shouldn’t be left abandoned for his gratitude in abundance ,” the political pundit concluded